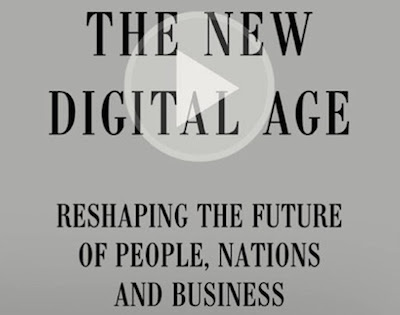 The New Digital Age: Reshaping The Future Of People, Nations, & Business was written jointly by Eric Schmidt (former Google CEO) and Jared Cohen (director of Google Ideas), which explains why it has blurbs by Bill Clinton, Tony Blair, Henry Kissinger, and Walter Isaacson. Schmidt and Cohen first collaborated in 2010, co-writing an essay (The Digital Disruption) for the journal Foreign Affairs.

Our Future Selves, the first chapter of The New Digital Age, describes a future world in which our lifestyles are enhanced by developments in personal technology such as self-driving cars (a Google X project) and other conveniences. The remainder of the book focuses on geo-political issues: "in order to understand the future of politics, business, diplomacy and other important sectors, one must understand how technology is driving major changes in those areas."

Unsurprisingly, as the authors are both Google executives, this is a techno-utopian vision: "The case for optimism lies not in sci-fi gadgets or holograms but in the check that technology and connectivity bring against abuses, suffering and destruction in our world... Anyone passionate about economic prosperity, human rights, social justice, education or self-determination should consider how connectivity can help us reach these goals and even move beyond them."

The book's main theme is the vast potential of the internet to affect global change: "We believe that modern technology platforms, such as Google, Facebook, Amazon and Apple, are even more powerful than most people realize, and our future world will be profoundly altered by their adoption and successfulness in societies everywhere." As such, it's an update of the "atoms to bits" argument proposed by Nicholas Negroponte in Being Digital. (Tim Wu's The Master Switch is a more cautionary analysis of the digital age.)
Categories: book reviews
continued...