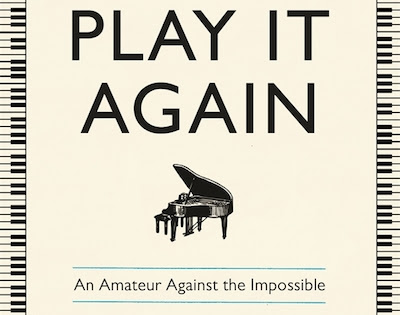 Play It Again: An Amateur Against The Impossible is Alan Rusbridger's journal, from August 2010 to December 2011, of his attempt at learning to play Chopin's Ballade #1 on the piano. The book's title, of course, is a famous misquote from Casablanca: Ilsa says, "Play it, Sam. Play As Time Goes By"; Rick says, "If she can stand it, I can. Play it". Other examples include Woody Allen's film Play It Again, Sam (and the headline Play It Again, Siam!).

Rusbridger is the editor of The Guardian, and his account of his piano lessons is interspersed with his reactions to the major news events of the period, including the investigation by Nick Davies (author of Flat Earth News) into News International's phone-hacking. Here's his reaction to Rupert Murdoch's decision to close the News Of The World: "It's a hold-the-front-page, stop-the-presses, stop-the-clocks, stop-everything scoop. The history of newspapers has just been rewritten."

The eighteen months that he covers also include his negotiations with Julian Assange on the publication of the WikiLeaks cables (also discussed in Page One, to which Rusbridger contributed). Phone-hacking and WikiLeaks (and this year's Edward Snowden story) are some of The Guardian's biggest-ever scoops, and I'd rather read about Rusbridger the editor than Rusbridger the pianist. At the end of one chapter, he writes: "But enough piano talk for now. Tomorrow we publish the biggest leak of state secrets in history", and I couldn't agree more.
Categories: books, media
continued...