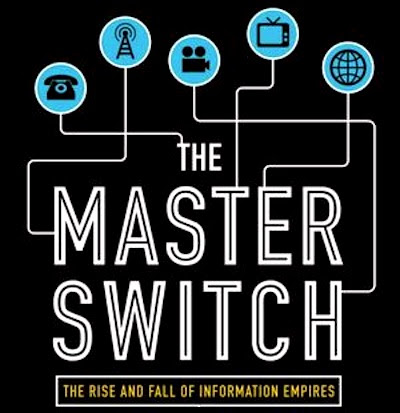 The Master Switch: The Rise & Fall Of Information Empires, by Tim Wu, has been slightly expanded for its paperback edition. Wu's meticulously researched book has an impressive and ambitious historical scope, covering the development of communications media throughout the 20th century.

Wu identifies a pattern that he calls "the Cycle": the introduction of a new technology creates an open period of unregulated access, though this honeymoon phase ends when vertically-integrated oligopolies take over control of the medium. Wu demonstrates that radio/television networks (NBC, CBS, and ABC) and the Hollywood studio system (MGM, Paramount, Fox, RKO, and Warner) conform to this model, though his central example is AT&T, which fought off competition from Western Union to effectively monopolise American telecommunications.

The history of the Cycle serves as a cautionary tale, as the paradigm shift to digital communication could instigate a new Cycle of conglomeration. Microsoft's Internet Explorer browser crushed its rival, Netscape, leading to the 1998 anti-trust case. Early web portals such as AOL (which later merged with Time Warner) have been replaced by an effective duopoly of social networks: Facebook and Twitter. Smartphone operating systems are similarly bifurcated, between Google's Android and Apple's iOS. Apple (which operates a 'walled garden' similar to the old AOL model) and Google (now facing its own anti-trust case) both claim to value innovation above profit, though both companies are now producing software and hardware, reducing compatibility between different systems.

As Wu writes: "Both Apple and Google, while pursuing different versions of the good, have continued to cultivate and leverage their status as dominant firms and, technically, monopolists in some key markets... Along with a few other 800-pound gorillas, like Facebook and Amazon, they disproportionately determine what the internet is in the 2010s". Wu's proposed solution is the adoption of a "Separations Principle", comparable to the independence of the three branches of government or the division of church and state. He argues that the three tiers of communications media - content producers, network infrastructure providers, and device manufacturers - should remain separate, thus avoiding the potential risks associated with vertical integration.
Categories: books, media
continued...