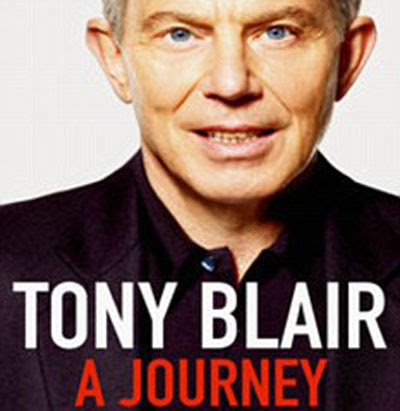 We've had the fictional version (in The Ghost Writer), and the perspectives of Alastair Campbell and Peter Mandelson, but now Tony Blair has written his memoir, A Journey, published in America with an additional subtitle: My Political Life. (Andrew Rawnsley's Servants Of The People and The End Of The Party cover the same ground more objectively.)

Blair admits that his suspicious-looking arrangement with Bernie Ecclestone was "a really stupid lapse of judgement"; that the expensive and underwhelming Millennium Dome was "in retrospect a mistake"; and that he should not have sacked Peter Mandelson once, let alone twice. Surprisingly, his biggest regret was passing the Freedom of Information Act: "I quake at the imbecility of it". (He still doesn't regret the invasion of Iraq, and there is no apology for the two misleading intelligence dossiers; he did feel "desperately sorry" after the brutal killing of Jean Charles de Menezes - but only "for the officers involved".)

Blair's account is informal (with too many exclamation marks) and surprisingly candid, with moments of comedy: Gordon Brown locked in the loo ("Withdraw from the contest or I'm leaving you in there") and John Prescott on the warpath ("Where's fookin' Menzies?"). It's also unavoidably one-sided. He is astonished, for example, that Labour leader John Smith considered appointing the Scottish Gordon Brown as deputy leader; naturally, he felt that he, rather than Brown, should be Smith's deputy, forgetting or ignoring that he is also a Scot. (Regarding the subsequent Labour leadership contest, there is no mention of the fabled Granita deal.)

A curious footnote: Blair begins the book by describing his meeting with the Queen on the day he became Prime Minister. According to his account, the Queen told him: "You are my tenth prime minister. My first was Winston [Churchill]". In The Queen, a fictionalised account of Blair and the Queen's relationship, she also uses precisely those words. The film's writer says that he invented the dialogue, and Blair says that he has never seen the film. So it's either an enormous coincidence, or the film had some extremely senior sources, or Blair is confusing fiction with fact.
Categories: book reviews, politics, Tony Blair
continued...