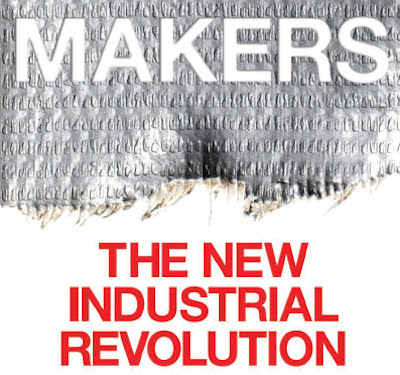 Makers: The Next Industrial Revolution is Chris Anderson's guide to the 'next big thing' in technology: 3D printing, otherwise known as additive manufacturing. Anderson is a former editor of Wired, and now runs companies that design and manufacture drones (another potential 'next big thing').

Like his first book The Long Tale, Makers began as a Wired magazine article; in this case, it was In The Next Industrial Revolution, Atoms Are The New Bits (published in 2010). The shift from physical atoms to digital bits has been Anderson's central thesis for more than a decade, forming the basis of each of his books, though it was first developed by his Wired colleague Nicholas Negroponte.

Like The New Digital Age, Makers is a techno-utopian book, envisioning a "Third Industrial Revolution" in which 3D printing will allow each of us to design and create consumer products in our own homes. (Peter Marsh also discusses this possibility, in his book The New Industrial Revolution.) Makers develops Anderson's 'long tail' concept and applies it to physical products: "The Internet democratized publishing, broadcasting, and communications, and the consequence was... the Long Tail of bits. Now the same is happening to manufacturing - the Long Tail of things."
Categories: book reviews
continued...