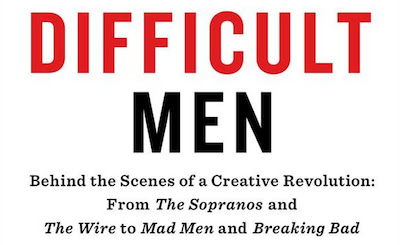 Difficult Men, by Brett Martin, is an account of the recent open-ended drama series about morally ambiguous male protagonists on American cable television. Martin interviews the creators of The Sopranos (David Chase), The Wire (David Simon and Ed Burns), Six Feet Under (Alan Ball), Deadwood (David Milch), and others, celebrating what he describes as the "Third Golden Age" of American television.

Whereas Hollywood focused on franchises, remakes, and superheroes, HBO and other cable channels produced sophisticated, character-based, and adult-oriented dramas. Significantly, Martin Scorsese directed the pilot episode of Boadwalk Empire for HBO, an example of creative crossover from film to television.

The touchstone for this trend was The Sopranos, the HBO series inspired by GoodFellas, and its success helped make cable TV drama "the signature American art form of the first decade of the twenty-first century". Difficult Men's subtitle is Behind The Scenes Of A Creative Revolution: From The Sopranos & The Wire To Mad Men & Breaking Bad. For the UK edition, the subtitle was reversed.
Categories: books, media
continued...