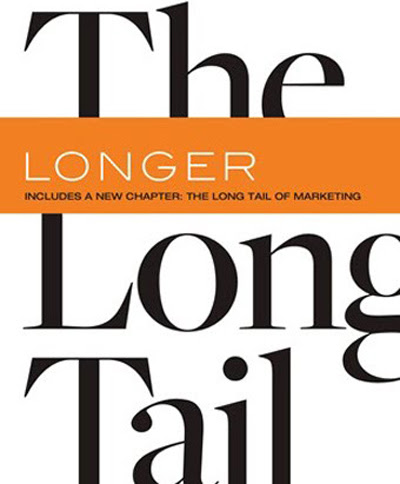 Chris Anderson originally formulated his 'long tail' theory in a 2004 Wired magazine article. (Anderson is the editor of Wired, making him one of the most influential figures in technology and media.) The article was subsequently expanded into the best-selling book The Long Tail: Why The Future Of Business Is Selling Less Of More. The paperback edition contains an extra chapter (on marketing), thus it's been retitled The (Longer) Long Tail: How Endless Choice Is Creating Unlimited Demand.

Anderson's thesis is that there is a market for everything. Not a potential market, but an actual one: that anything and everything will be consumed by someone, somewhere. He compares the limited selection of products available at bricks-and-mortar shops (where shelf space is reserved only for popular items) with the seemingly limitless diversity offered by e-commerce retailers. He then proposes a paradigm shift in supply-and-demand: catering to niche markets (the 'long tail' of the sales curve) by selling a wider range of products at lower volumes.

As we've seen in the past, wider distribution channels do not always lead to increased diversity. There may be hundreds of cable television stations, though very few of them offer original programming, so choice is only an illusion. Similarly, multiplex cinemas don't offer a variety of films; instead, they show the same blockbusters on more screens. (For instance: a fourteen-screen cinema in Bangkok showing Transformers on twelve of those screens!) More distribution channels just means more ways to receive the same content, as the new channels are all controlled by oligopolies (such as Hollywood studios, TV/radio networks, and online social networks).

Media conglomerates see increased consumer choice as a potential threat, because it leads to market fragmentation: as the number of cable TV channels increases, for example, audiences for terrestrial networks are decreasing. Anderson invites corporations to embrace this trend, utilising the seemingly limitless bandwidth of digital distribution to produce (or aggregate) an endless variety of sub-genres and specialist-interest products, all of which would eventually find an audience.

This theory works perfectly for digital aggregators such as iTunes: Apple can store millions of tracks on its servers, ready to be downloaded by a global audience. Indeed, Anderson sees the digital-only model as the ultimate future of 'long tail' distribution. It's also a potential model for other media, such as newspapers, films, computer games, and software, in their inexorable (and arguably regrettable) shift towards digital-only distribution; it's not applicable to other industries, though.

The conversion from physical to digital ("a progression from the economics of pure atoms, to a hybrid of bits and atoms, to the ideal domain of pure bits"), and especially the potential for an infinite variety of consumer choices, remain utopian ideals rather than realistic objectives. While digital files can be stored, distributed, and copied at no cost, they still have to be produced in the first place. The notion of transforming information from atoms to bits was predicted and advocated by Nicholas Negroponte in his Wired columns and his book Being Digital; Anderson appropriates Negroponte's concept without acknowledgement.
Categories: books, media
continued...