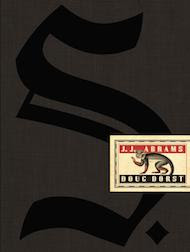 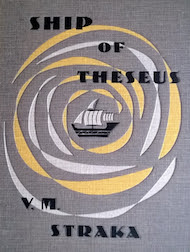 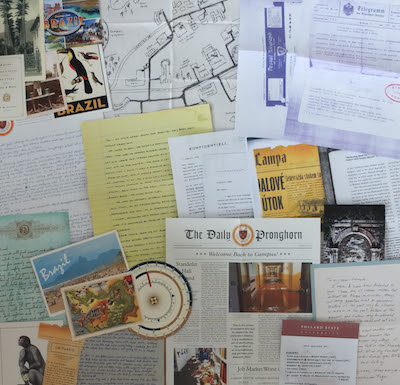 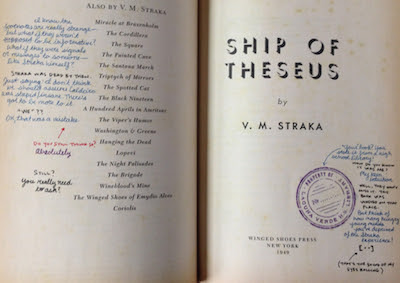 S. is the new novel from JJ Abrams (director of Super 8 and Star Trek) and Doug Dorst. According to the blurb, it was 'conceived' by Abrams and written by Dorst, which presumably means that Abrams initiated the project though Dorst actually wrote the text.

The novel's title refers to its central character, S, a stranger known only by a single letter, like 'K' in Franz Kafka's The Trial. The title, and Abrams and Dorst's names, appear only on the book's slipcase; the book itself has an alternate title, author, and publisher.

The book inside the slipcase is Ship Of Theseus, written by VM Straka and translated by FX Caldiera. Ship Of Theseus was published by Winged Shoes Press in 1949, and it looks, feels, and even smells like a sixty-year-old book. It bears a 1949 copyright notice ("Printed in the United States of America"), the pages have yellowed with age, the spine has a Dewey Decimal sticker, and there are library stamps on the endpapers.

Ship Of Theseus is, of course, entirely fictitious, as are its author and translator and even its publisher. In reality, it's a novel written by Dorst, printed in China in 2013 though designed to look like a 1949 library book. When removed from its modern slipcase, Ship Of Theseus really is an incredibly convincing simulation of a 1949 hardback.

Aside from the prose text, almost every page of Ship Of Theseus contains extensive marginalia. Two students, Eric and Jennifer, have carried out a personal correspondence in the margins of the book. They use a variety of pens, with each pair of colours representing a different dialogue between them, and their handwritten notes are rendered as convincingly as the rest of the book.

In addition, there are twenty-nine pieces of ephemera inserted between the book's pages. These include several handwritten letters, picture postcards, photographs, newspaper clippings, photocopied documents, a volvelle, and even a napkin. Each of these items is reproduced as authentically as the book itself, and the attention to detail is remarkable.

Therefore, S. presents a multitude of inter-connected narratives: the text of Ship Of Theseus by Straka, the footnotes by Caldiera, the numerous threads of Eric and Jennifer's marginalia, and the supplemental material in the ephemera. Eric and Jennifer search for clues to the identity of the mysterious Straka, speculating that Caldiera and Straka may be the same person. An elusive author, a book within a book, and the mystique of old library books were also central to Carlos Ruiz Zafon's The Shadow Of The Wind.

Book publishing is currently migrating to tablets and e-readers, so it's encouraging that S. is a defiantly physical, printed object. It fetishises old-fashioned books, and Abrams and Dorst have created a perfect simulacrum of one. Publishers like Taschen specialise in elaborate collector's editions (such as Napoleon), and Visual Editions publishes novels in increasingly experimental formats (such as a reprint of Tristram Shandy), though S. is a unique and extraordinary example of innovation in book design.
Categories: books
continued...