After The Music Stopped 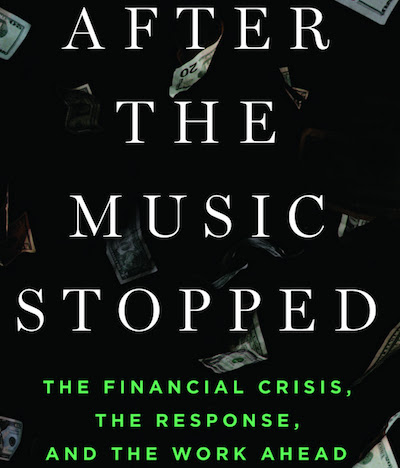 After The Music Stopped: The Financial Crisis, The Response, & The Work Ahead, by Alan S Blinder, is the first book to fully explore the causes and consequences of the global economic meltdown that began in 2008. The collapse of America's subprime mortgage market triggered the most damaging financial crisis since the Great Depression of the 1930s, and was followed by economic collapses across the Eurozone from which Greece and Spain are still recovering. (Interestingly, the 2008 collapse is known in Thailand as the 'hamburger crisis', just as Thailand's own 1997 economic meltdown was called the 'tom yam kung crisis'.)

After The Music Stops begins with an intimidating three-page list of financial acronyms, though Blinder's accessible writing style - frequent rhetorical questions, subheadings, and conversational asides - guides the reader through the economic complexities. For example: "Now, take a deep breath... this is where we move from issues that were moderately controversial - leaving bipartisan agreement at least conceivable, to issues that were supercontroversial". (This is in contrast to the dry prose of Gordon Brown's Beyond The Crash.)

The text may be accessible, though its analysis is far from superficial, and After The Music Stopped is probably the most authoritative account of the financial crisis to date. As Blinder writes in his preface: "a comprehensive history of this episode has yet to be written. A number of fine books, mostly by journalists, have examined pieces of the puzzle, sometimes in excruciating detail... My purpose, instead, is to give the big picture".
Categories: book reviews
continued...