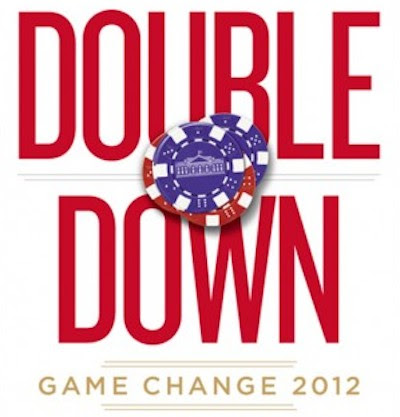 Mark Halperin and John Heilemann, who covered the 2008 US presidential election in Game Change, have written a sequel, Double Down: Game Change 2012, about President Obama's re-election last year. Its UK subtitle is The Explosive Inside Account Of The 2012 Presidential Election.

2008 was an extraordinary contest, thanks to the rivalry between Obama and Hillary Clinton, the ridiculous Sarah Palin, and Obama's historic victory. 2012, when Obama defeated the bland Mitt Romney, was a more pedestrian election, though Double Down is still a fascinating account.

Just as Game Change did in 2010, the revelations in Double Down have been making headlines, especially the book's claim that Obama's campaign team seriously considered replacing Joe Biden as Vice President with Hillary Clinton. The authors explain that "Biden didn't credit the speculation for a minute", though Clinton's own reaction is not included; presumably, she was one of the few key players who refused to be interviewed. Halperin and Heilemann spoke to practically everyone else, including Obama, Biden, Romney, and Bill Clinton (all on 'deep background', i.e. unattributed), though Hillary is conspicuous by her absence.

Double Down notes Obama's reaction to a previous book about his administration: he apparently complained that Ron Suskind's Confidence Men was "largely a piece of fiction". The anecdote is certainly credible, as Double Down's sources are second to none, though it also feels like schadenfreude from the authors towards one of their fellow political writers.

Halperin and Heilemann themselves became part of the narrative when Obama's election strategy was leaked to them: "two authors writing a book on the 2012 campaign knew all about the extraordinary session six weeks earlier; they had the whole roster of Obama's regrets in copious detail. "How could someone do this to me?" Obama asked". This leads to one of the book's most dramatic moments, with Obama storming out of a discussion with his most senior advisers, exasperated at the leak yet meeting another author that same afternoon: "At 2:55pm he had a meeting in the Oval Office. The meeting was with David Maraniss. For a fucking book interview". (The book was Barack Obama: The Story.)

Double Down is at its most captivating when analysing Obama's relationship with Bill Clinton, which develops from wary tolerance to mutual admiration. The book also provides a fascinating behind-the-scenes account of Obama's intense preparations for the presidential debates.

The midsection, with chapters devoted to the various Republican nominee contenders (Chris Christie, Jon Huntsman, Newt Gingrich, et al.), is less interesting, because Romney was clearly Obama's only serious rival. The other contenders were insignificant even in 2012, and should be only minor footnotes today.