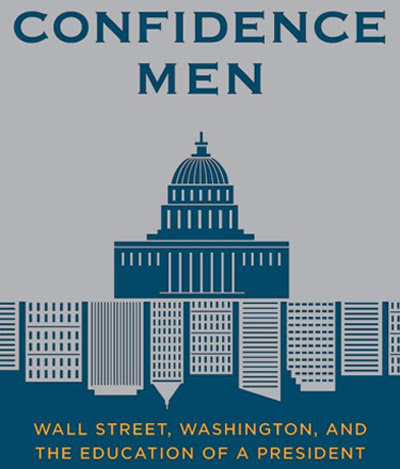 Confidence Men: Wall Street, Washington, & The Education Of A President, by Ron Suskind, reveals how Barack Obama's advisors dealt with the aftermath of the recent global economic crisis. It could have been called All The President's Men, but that title has already been taken by Carl Bernstein and Bob Woodward. Like Woodward (Obama's Wars), Suskind had top-level access, including an Oval Office interview with Obama; also like Woodward (and Game Change), Suskind's sources are mostly quoted anonymously.

Suskind depicts Obama as over-reliant on his aides, who take the opportunity to manipulate and even disregard the President. National Economic Council director Larry Summers, for example, is quoted complaining that "There's no adult in charge". Suskind's biggest scoop is his allegation that, after Obama instructed his economics team to find a way to restructure Citibank in 2009, Chief of Staff Rahm Emanuel ridiculed the idea and Treasury Secretary Tim Geithner simply ignored it. (Geithner denies the allegation, and in his Suskind interview Obama side-steps the issue of Geithner's potential insubordination.)