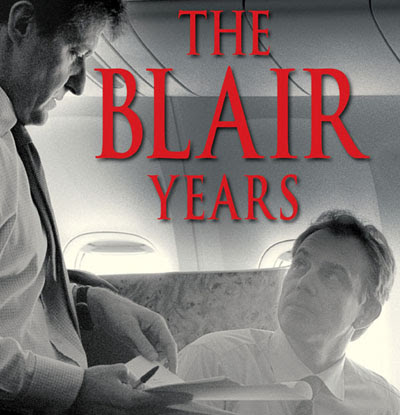 Alastair Campbell was Tony Blair's press secretary when Blair was leader of the opposition. When Blair became UK Prime Minister in 1997, Campbell became his official spokesman. When Blair won a second term in 2001, Campbell was given the unique role of Director of Communications & Strategy. He resigned in 2003, and Blair stepped down earlier this year. Campbell, who was one of the key architects of New Labour, kept a daily diary which ran to over 2,000,000 words, and a single-volume concise edition has been published now that Blair is no longer Prime Minister.

Campbell freely admits that there is much material missing from The Blair Years. (Or The TB Years, as it should be called: everyone is referred to by their initials, and the shorthand prose style is not easy to read in long stretches.) The most obvious omission is Gordon Brown: there are occasional references to his uncommunicative grumpiness, but not to the repeated blazing rows we know he had with Blair. Presumably Campbell wants to spare Brown any embarrassment, now that Brown himself is Prime Minister.

Andrew Rawnsley's excellent Servants Of The People, by contrast, offers much more on the Blair/Brown conflict, though his sources are mostly off-the-record and he only covers the first three years of Blair's premiership. Nevertheless, it's probably the most authoritative account of the Blair government yet published. Famously, it includes the anonymous observation that Brown is "psychologically flawed", a statement widely attributed to Campbell. I hope he's planning an updated edition.

Alastair Campbell was Blair's 'spin doctor', though he was often in the headlines himself. His diaries cannot be a definitive record of the period, because it's impossible for someone who was simultaneously managing and making the news to be impartial. They are also incomplete: not only has Brown been toned down, but Blair and the Cabinet Office were permitted to delete especially sensitive passages.

Notably, much of Blair's swearing has been removed, including his four-letter description of veteran Labour MP Roy Hattersley. Plenty of profanities remain, however, most of them Campbell's own comments on other people. In this respect, The Blair Years shares the frankness of Alan Clark's Diaries. Conservative MP Clark's account of former Prime Minister Margaret Thatcher's downfall was astonishingly candid, and, indeed, Clark and Campbell were friends, with Clark making occasional appearances in The Blair Years.

The Blair Years offers a behind-the-scenes look at all the major UK political stories of the past decade, with anecdotal details of Blair's private feelings and actions. Arguably the most fascinating section, though, is that devoted to Campbell's conflict with the BBC over shortcomings in government dossiers published before the Iraq war.

The government commissioned a dossier on Iraq's military capabilities, which was written by the Joint Intelligence Committee in 2002. The dossier claimed that Iraq possessed an arsenal of weapons of mass destruction, which were capable of being deployed within forty-five minutes at any time. In 2003, another dossier was also published, this time prepared within the government, though it was later revealed that much of it had been plagiarised from existing online sources.

On BBC Radio 4's Today programme in 2003, correspondent Andrew Gilligan alleged that the 2002 dossier had been "sexed up" with more forceful language: an un-named source told him that the JIC's language had been altered after suggestions from within the government. Specifically, Gilligan claimed that the "forty-five minutes" detail was added at the request of the government. In a subsequent newspaper article, again quoting his un-named source, Gilligan identified Campbell as the person who added the "forty-five minutes" detail to the dossier.

Campbell denied sexing up the dossier, but the BBC refused to retract the allegation. Gilligan's source, WMD expert David Kelly, committed suicide after his name was made public. It was suspected that Campbell had learned of Kelly's identity and leaked it himself. A public enquiry into Kelly's death by Brian Hutton exonerated Campbell and the government while criticising the BBC's editorial judgements. Consequently, the BBC's Chairman and Director-General both resigned.

In The Blair Years, Campbell denies leaking Kelly's name and suggesting "forty-five minutes". He writes extensively about his bitter confrontations with the BBC in the immediate aftermath of Gilligan's allegations, and his submission of evidence to the Hutton enquiry. It is this information which makes Campbell's diaries so valuable, rather than its interesting though hardly earth-shattering day-to-day Blair anecdotes.
Categories: book reviews, media, politics, Tony Blair
continued...