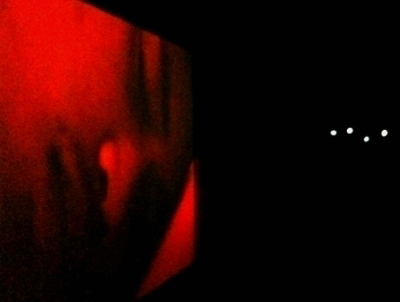 Apichatpong Weerasethakul's multi-screen Primitive video installation opened today at The Jim Thompson Art Center in Bangkok, and will close on 29th February 2012. The exhibition was slightly delayed due to the Bangkok flood last month.

Primitive is an inter-disciplinary project that includes the short films A Letter To Uncle Boonmee and Phantoms Of Nabua. Apichatpong's feature-length Uncle Boonmee Who Can Recall His Past Lives, which won the Palme d'Or last year, is also part of the Primitive project. The exhibition itself features seven videos: Primitive, Nabua, Making Of The Spaceship, A Dedicated Machine, An Evening Shoot, I'm Still Breathing, and Nabua Song.

Apichatpong has collaborated with The Jim Thompson Art Center before: he gave a talk at the Center in 2008 (Apichatpong On Video Works, part of Tomyam Pladib). He gave similar talks last year at MBK and this year at the Thai Film Archive.