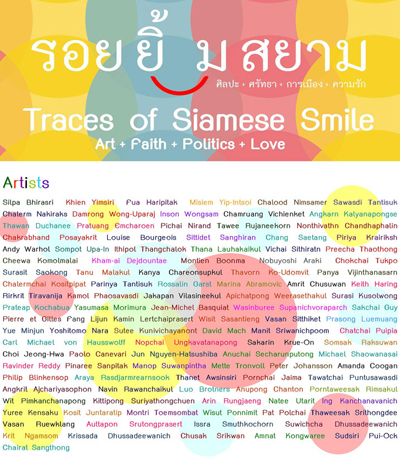 Despite its corny title, Traces Of Siamese Smile: Art + Faith + Politics + Love could be one of the greatest exhibitions of the year. It features multi-media works by Thai artists and filmmakers including Wisit Sasanatieng, Apichatpong Weerasethakul, and Araya Rasdjarmrearnsook. International artists such as Andy Warhol, Marina Abramovic, and Nobuyoshi Araki are also included, and there are over 100 artists in total. Apichatpong's new video Luminous People features an abbot blessing boat passengers while they sleep and a young man singing about the death of his father. Wisit is represented by Norasinghavatar, part of the Short Film Project.

The exhibition was originally scheduled to open on 20th September, at the new Bangkok Art & Culture Centre. Then, the opening was postponed until 23rd September. Finally, at the very last minute, it was inexplicably postponed again, to open on 24th September. It will close on 26th November (not 23rd November as originally scheduled).
Categories: Apichatpong Weerasethakul, art exhibitions, Thailand
continued...