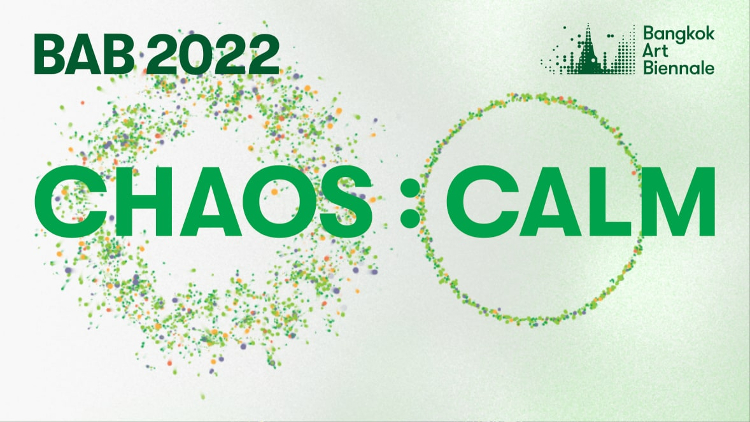 After Beyond Bliss (สุขสะพรั่ง พลังอาร์ต) in 2018 and Escape Routes (ศิลป์สร้าง ทางสุข) in 2020, the third Bangkok Art Biennale’s theme is Chaos:Calm (โกลาหล:สงบสุข). As in previous years, the Biennale (บางกอก อาร์ต เบียนนาเล่) is being held at multiple venues around the city, from galleries to temples. The event opened on 22nd October, and runs until 23rd February next year.

A video installation by Wantanee Siripattananantakul, The Web of Time, is one of the highlights of the 200 artworks on display. The half-hour, two-channel video, on show at Queen Sirikit National Convention Centre (QSNCC), comprises three short films linking human history and the natural world. As the Biennale catalogue explains, in one segment an African grey parrot “becomes like a medium casting a watchful eye on the events happening in the world.” The parrot and its silhouette observe news footage of recent protests, including a report by BBC correspondent Jonathan Head on anti-government demonstrations in Siam Square.

Andres Serrano was one of the featured artists in 2020, and this year’s event includes another controversial American photographer: Robert Mapplethorpe. A handful of Mapplethorpe’s portraits—though not his more explict works, of course—are on display in a self-contained gallery within the QSNCC exhibition. Works by the provocative British artists Jake and Dinos Chapman are on show in a similar space: etchings and meticulous miniature dioramas that continue their career-long fascination with Francisco Goya’s The Disasters of War (Los desastres de la guerra).