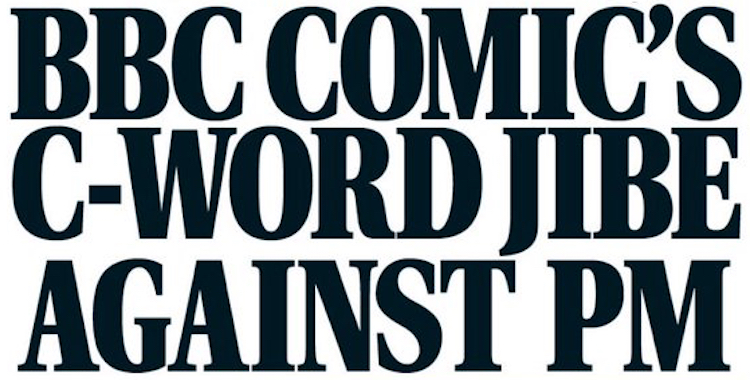 The long-running BBC1 satirical panel show Have I Got News for You marked the end of Boris Johnson’s premiership with a special episode titled Have I Got News for Boris on 2nd September. The programme recounted Johnson’s numerous scandals (such as unlawfully proroguing parliament and breaking coronavirus pandemic restrictions), though two words in the script—“cosmic cunt”—led to tabloid outrage two days later. The Mail on Sunday’s front-page headline on 4th September was “BBC COMIC’S C-WORD JIBE AGAINST PM”.

The Mail accused presenter Jack Dee of insulting Johnson, though in fact the alliterative pejorative was a quote from The Times, which attributed it to an unnamed cabinet minister in an article published on 9th July. The Mail’s hyperbolic description of the show as “a relentless barrage of highly personal attacks” and “a torrent of ‘spiteful and crass insults’” is an indication of its anti-BBC bias.

There have been two previous front-page tabloid headlines about the c-word. On 4th February 2017, The Sun (“BECKS C-WORD FURY AT ‘SIR’ SNUB”) reported a leaked email in which ex-footballer David Beckham called the Honours Committee “unappreciative cunts”. (Beckham had obtained an injunction preventing The Times from publishing the email, though other papers were not bound by it.) On 15th May 2015, the Daily Star (“BEEB CALLS FARAGE C-WORD ON TELLY”) gleefully highlighted a slip of the tongue by journalist Norman Smith, who referred to politician Nigel Farage as a “cunt” rather than a ‘cult’ during a live BBC News TV report.
Categories: media, politics
Dateline Bangkok