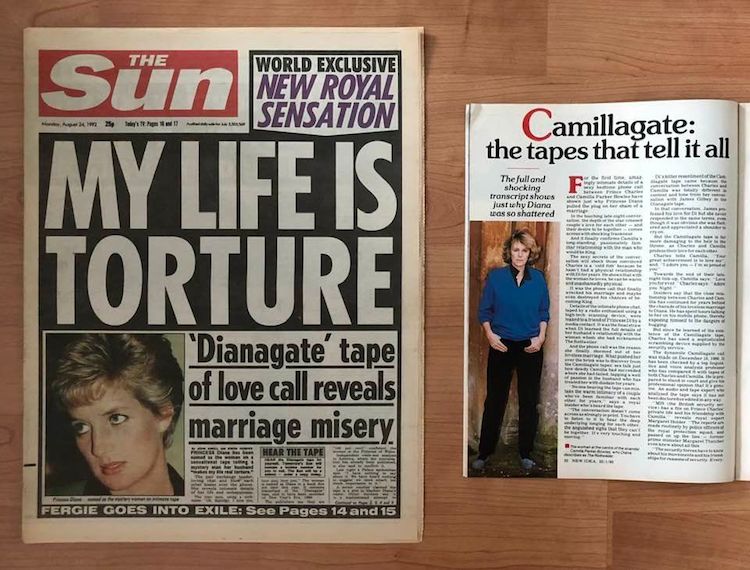 This month marks the thirtieth anniversary of the so-called ‘Dianagate’ scandal, the publication of a telephone conversation between Princess Diana and James Gilbey, with whom she was having an affair. A transcript of their phone call was printed in The Sun newspaper on 24th August 1992, under the banner headline “MY LIFE IS TORTURE”. The headline is a quote from the tape: Diana says that Prince Charles “makes my life real, real torture, I’ve decided.” (The tape was later sampled by the techno band House of Windsor for their novelty single Squidgy, a reference to Gilbey’s pet name for Diana.)

According to The Sun, the call was accidentally recorded by a radio ham, Cyril Reenan, on New Year’s Eve 1989. A second amateur radio enthusiast, Jane Norgrove, subsequently provided the paper with her own tape of the call. The clarity of the tapes, and the unlikely coincidence of two accidental recordings of such a significant conversation, led to (as yet unproven) allegations that landlines in royal residences had been tapped.

Such speculation increased when a phone call between Charles and his mistress, Camilla Parker-Bowles, was also leaked. The transcript of this so-called ‘Camillagate’ tape—recorded a fortnight before Diana’s call, on 18th December 1989—was first published by New Idea on 23rd January 1993. At the time, the magazine was owned by Rupert Murdoch, proprietor of The Sun, and it’s likely that the story was planted in an Australian magazine to provide some distance from Murdoch’s UK tabloids. Camillagate caused even more of a sensation than Dianagate, as the conversation was more directly sexual, and Charles was recorded joking about being reincarnated as his lover’s tampon: “God forbid, a Tampax! Just my luck!”
Categories: media
Dateline Bangkok