Heavenly Bodies:
Cult Treasures and Spectacular Saints from the Catacombs 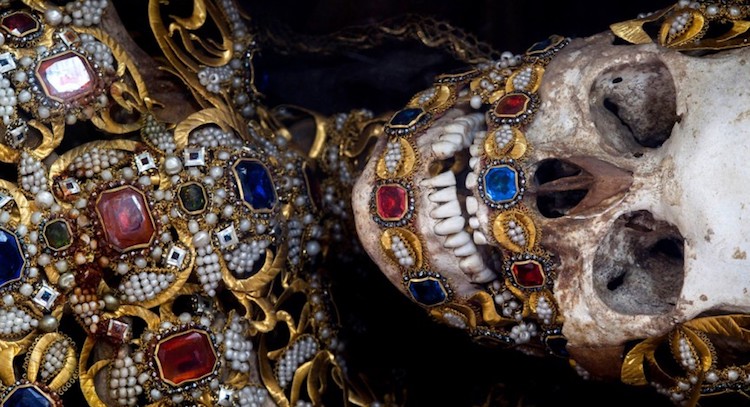 Paul Koudounaris has written a trilogy of superb books on the display of human skeletons. The Empire of Death is a history of European ossuaries, while Memento Mori features secular and non-Christian memorials from around the world. Heavenly Bodies: Cult Treasures and Spectacular Saints from the Catacombs, published by Thames and Hudson in 2013, focuses on the skeletons discovered in Roman catacombs during the Counter-Reformation, which were distributed by the Vatican to churches in Germany, Switzerland, and Austria.

After the Reformation, replacement relics were required: “Large numbers of churches had been ransacked, ensuring that high volumes of new sacred bones were needed,” and the bodies from the catacombs became convenient “replacements for lost relics.” The skeletons were presumed to be those of Christian martyrs (though the wish was father to the thought) and were known as Katakombenbeiligen (‘catacomb saints’) to distinguish them from the saints canonised by papal decree.

The Katakombenbeiligen were decorated with gold and jewels and displayed in ornate reliquaries, venerated in much the same way as the relics of ‘real’ saints. That is, until archaeological evidence inevitably intervened, proving that most of the bodies dated from the time of Constantine, the first Roman emperor to convert to Christianity. These “glittering imposters”, as Koudounaris describes them, were eventually regarded as relics in that term’s pejorative sense, as obsolete. James Bentley’s book Restless Bones discusses holy relics in more depth, though it lacks the stunning photography of Heavenly Bodies.
Categories: books
Dateline Bangkok