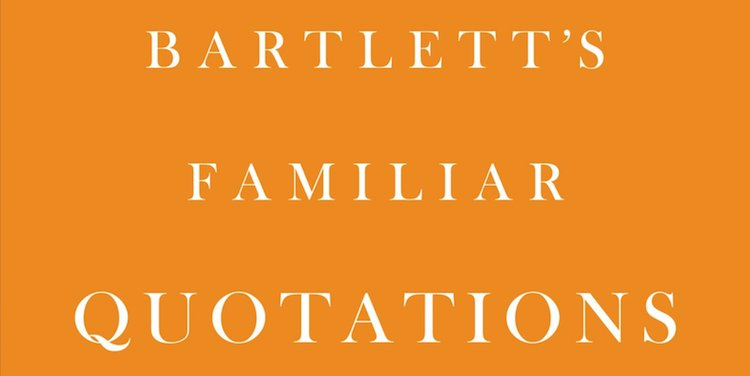 John Bartlett’s Familiar Quotations was first published in 1855, with expanded editions released every ten years or so. Its chief competitor—The Oxford Dictionary of Quotations, edited by Alice Mary Smyth—first appeared almost ninety years later. (My first edition copy of Smyth’s book was published with corrections in 1942.)

Bartlett’s serves as a comprehensive cultural history, covering not only literature (Hamlet: “To be, or not to be: that is the question”) but also political speeches (the Gettysburg Address: “government of the people, by the people, for the people, shall not perish from the earth”), interview soundbites (Princess Diana: “There were three of us in this marriage, so it was a bit crowded”), and film dialogue (Casablanca: “Round up the usual suspects”). The eighteenth edition, edited by Geoffrey O’Brien, was published in 2012.

I have a rather niche non-transferable skill: correctly predicting the pull quotes that will be reported by news organisations after interviews and speeches. It’s also highly satisfying, when conducting interviews for publication, if the interviewee says something that makes an ideal pull quote. Effectively, Bartlett’s collects the pull quotes that stand the test of time, and a new (nineteenth) edition will be released later this year.

Many reference books have migrated online, where they can be more easily searched and updated. But print editions of dictionaries of quotations remain necessary, as online quote databases are filled with paraphrases and misattributions. (This has been parodied in an online meme: a fake quote from Abraham Lincoln warning people not to believe what they read on the internet.)

In a 1993 Quote... Unquote newsletter, Nigel Rees described the problem of “Churchillian Drift”, whereby quotations are commonly misattributed by default to either Winston Churchill or George Bernard Shaw. But even when their attributions are correct, most quotation websites provide no context whatsover: publication dates and sources are rarely cited, making annotated dictionaries such as Bartlett’s essential resources.
Categories: books
Dateline Bangkok