The Reproduction of a Catastrophic Reminiscence 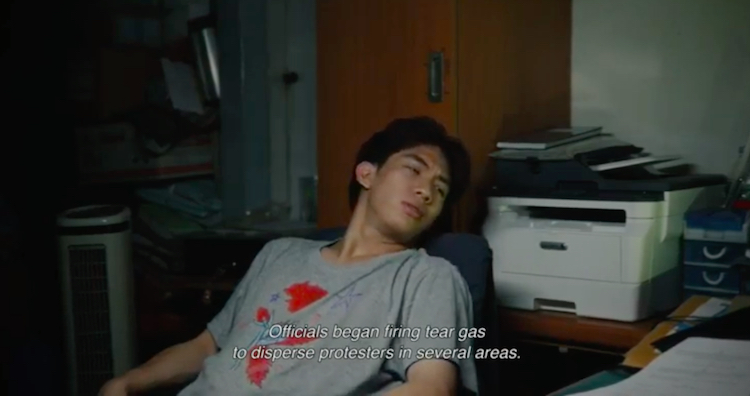 Kulapat Aimmanoj’s short film The Reproduction of a Catastrophic Reminiscence was shown at the Thai Film Archive on 18th December, on the first day of the 25th Thai Short Film and Video Festival. The film is a drama—largely a two-hander—in which two young anti-government protesters argue about their tactics. Non is no longer an activist, though the more radical Mhee reminds him what they are fighting for. With its theme of personal and ideological tensions between protest leaders, Kulapat’s film is similar to Aomtip Kerdplanant’s 16 ตุลา (‘16 Oct.’)—which was screened at the Archive on Christmas Day—and Sunisa Manning’s novel A Good True Thai.

Kulapat also released a black-and-white version, The Reproduction of a Catastrophic Reminiscence: Noir, online earlier this year. The film begins with a reporter on Facebook Live describing the use of tear gas against protesters at major intersections in Bangkok. This respresentation of political protests via simulated media coverage also occurs in Kongdej Jaturanrasmee’s feature film Snap, and I wrote about the use of similar distancing devices in Thai Cinema Uncensored.
Categories: films, politics
continued...