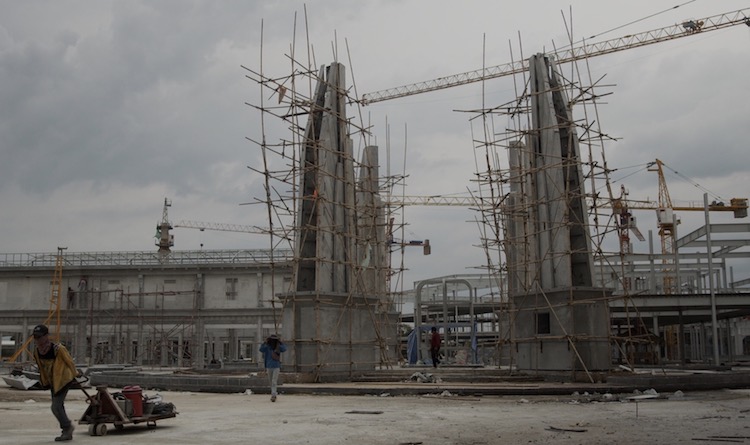 Suwaporn Worrasit’s short film Ratchadamnoen Route View 2482+ was screened at the Thai Film Archive in Salaya on Christmas Day, as part of the 25th Thai Short Film and Video Festival. The film shows builders constructing a reproduction of Democracy Monument, intercut with an anti-government protest at the real Democracy Monument in Bangkok on 20th September 2020. The title refers to 1939 (2482 in the Buddhist Era), the year that the monument was commissioned.

The reproduction of the monument was built for Bangkok World, a new tourist attraction due to open next year. Suwaporn’s film features exceptional footage of labourers carefully installing and painting the concrete reproduction, creating a scale model of the original. However, Democracy Monument is more than a mere architectural landmark; for decades, it has been a focal point for political rallies, and borne witness to military crackdowns. After the 14th October 1973 massacre, the bodies of the victims were placed on the monument. In 2010, red-shirt protesters wrapped it in banners painted with blood.

Once it’s completed, Bangkok World’s Democracy Monument will be a pristine simulacrum—the Disneyland version of Bangkok’s heritage—though it will reveal none of the original monument’s political and social significance. While it’s under construction, surrounded by bamboo scaffolding, the reproduction is a metaphor for the country’s unfinished transition to democracy. Similarly, vintage photographs of Democracy Monument under construction appeared in the June 2012 issue of Sarakadee (สำรคดี) magazine and in Chulayarnnon Siriphol’s short film Karaoke: Think Kindly (คาราโอเกะ เพลงแผ่เมตตา), again symbolising the incomplete nature of Thai democracy.
Categories: films, politics
Dateline Bangkok