“A system in which everyone is equal...” 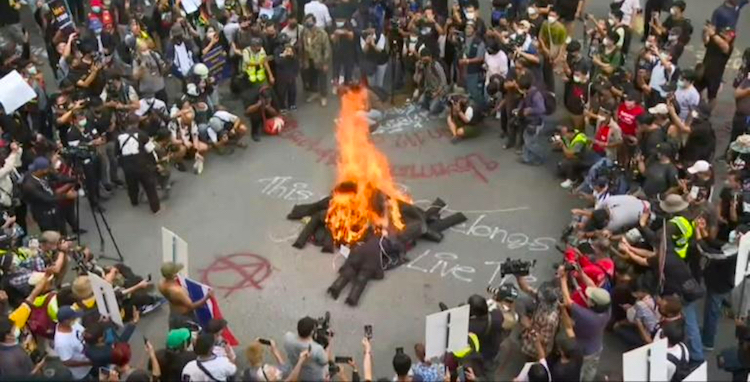 An anti-government protester was shot yesterday while marching from Pathum Wan intersection to the German embassy in Bangkok. Police fired rubber bullets at the crowd, hitting a man in the chest and puncturing his lung. (Riot police have repeatedly deployed rubber bullets against protesters this year. On 17th August, fifteen-year-old Warit Somnoi was hit by a live bullet, and he tragically died on 29th October after spending more than two months in a coma. Police officer Detwit Ledtenson was shot in the head on 7th October during a protest at Din Daeng.)

Protesters gathered at Pathum Wan yesterday afternoon, calling for the abolition of the lèse-majesté law. As shown in an AFP photograph by Pitcha Dangprasith, they also burnt effigies of the Constitutional Court judges who ruled on 10th November that any call for reform of the monarchy was an attempt to overthrow the monarchy itself. The judgement related to speeches by three protesters—Arnon Nampa, Panusaya Sithjirawattanakul, and Panupong Jadnok—on 10th August last year, published in the booklet The Day the Sky Trembled (ปรากฏการณ์สะท้านฟ้า 10 สิงหา). (The Constitutional Court has previously ordered the dissolution of Thai Rak Thai, the People Power Party, Thai Raksa Chart, and Future Forward, which were also perceived as threats to the establishment.)

Outside the embassy, an open letter to the German government was read out. The statement highlighted the protesters’ concerns that recent actions by the Thai state are “pulling Thailand away from democracy and back to absolute monarchy,” and that the protest movement’s calls for reform of the monarchy are rooted in the fundamental principle of equality: “This is a fight to insist that this country must be ruled by a system in which everyone is equal.”
Categories: politics
Dateline Bangkok