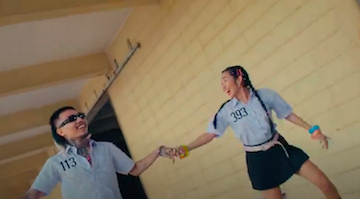 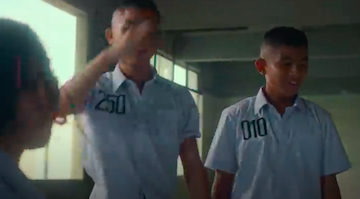 In the music video for their new single อนาคตคือ (‘the future is...’), Milli and Youngohm play high school sweethearts who are bullied by their classmates and, in a virtual reality simulation, they find themselves surrounded by tear gas and captured by riot police. The video, directed by Putiroj Devakul, also includes split-second images of recent anti-government protests, at which the police have also deployed tear gas.

Thai students have numbers embroidered on their uniforms, though the numbers in the video all have political significance. Milli’s number is 393, the section of the criminal code that forbids public insults. (She was fined ฿2,000 after insulting Prayut Chan-o-cha on Twitter, and the song includes the ironic lyric “I love you two thousand”.) Youngohm’s number, 113, refers to the law against overthrowing the government. (The record label vetoed his original plan to use the number 112, a reference to the lèse-majesté law.) The respective numbers of the two school bullies, 010 and 250, refer to a regnal number and unelected senators (250 of whom were appointed by the junta).

Filmmaker Thunska Pansittivorakul has also used numbers on clothing as a political code. In his music video Remember (วน), a man wears a jumpsuit with the number 1721955, a reference to 17th February 1955, the date when three men were executed for the murder of King Rama VIII. In his new film Danse Macabre (มรณสติ), two men have the numbers 1702 and 1955 on their respective running shorts.
Categories: music, politics