“Distortion that incites youths to be led astray...” 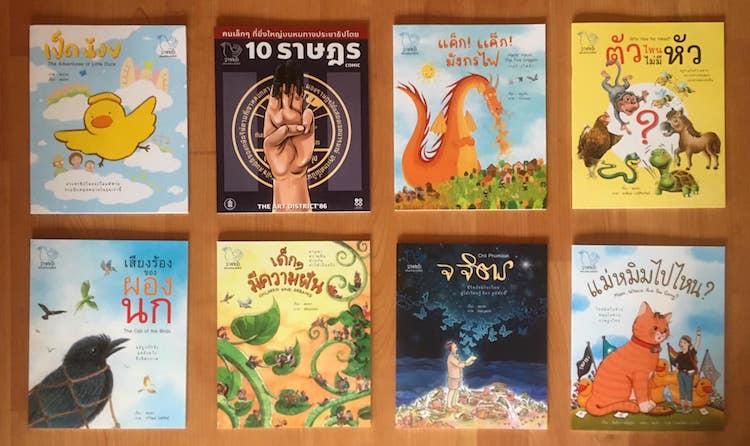 The Ministry of Education is investigating a series of eight children’s picture books published this month. A spokesperson for Deputy Minister of Education Kanlaya Sophonpanich announced yesterday that Kanlaya has set up a panel to urgently inspect the books, as she believes they stir up hated and promote “distortion that incites youths to be led astray.” She also threatened the publisher with legal action.

The books were published by Family Club, who advertised them with a knowing wink as suitable for children aged five to 112. (The lèse-majesté law is article 112 of the Thai criminal code.) Rather than spreading hatred, as Kanlaya claims, they promote the opposite: tolerance, freedom, and equality. Three of the titles refer directly to the current anti-government protest movement: The Adventures of Little Duck (เป็ดน้อย); Mom, Where Are You Going? (แม่หมิมไปไหน?); and 10 ราษฎร (‘10 people’).

One of the books, Children Have Dreams (เด็กๆ มีความฝัน), features a quote from protest leader Panusaya Sithjirawattanakul on the back cover. Another title, Hack! Hack! The Fire Dragon (แค็ก! แค็ก! มังกรไฟ), was written by protest leader Sombat Boonngamanong, though its theme is environmental rather than political: he works as a firefighter in Chiang Mai, and his story is about the dangers of forest fires. The others in the series are Who Has No Head? (ตัวไหนไม่มีหัว), The Call of the Birds (เสียงร้องของผองนก), and Chit Phumisak (จ จิตร ชีวิตอัจฉริยะไทยผู้ใฝ่เรียนรู้ จิตร ภูมิศักดิ์).
Categories: books, censorship, politics