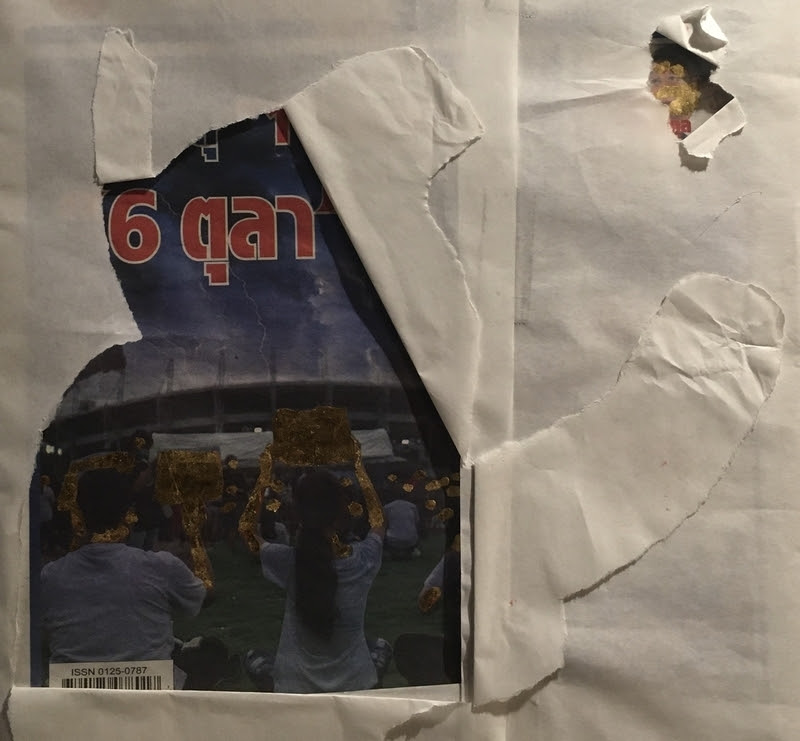 Kritsana Chaikitwattana’s exhibition Siamese Talk opened at Bangkok’s Jam Café on 25th September. Kritsana has covered newspapers and news magazines with plain paper, strategically torn to reveal photographs of Thai government ministers. The artist applied gold leaf to the images, a gesture that mocks the politicians rather than venerates them.

Gold leaf is usually applied to Buddha statues as an act of worship, though Kritsana is using it satirically. The gold makes the newspaper clippings glint like illuminated manuscripts, and it obscures the faces of Prayut Chan-o-cha and his cronies. The exhibition also includes images of King Vajiralongkorn, though Kritsana has used gold leaf only on the backgrounds of these photographs, not on the King himself.

In one piece, only a fragment of a headline is visible: “6 ตุลา” (‘6 Oct.’), i.e. the 6th October 1976 massacre. Siamese Talk also features paintings by Kritsana, including an image of the Buddha as Ultraman (พระพุทธรูปอุลตร้าแมน), a reference to the controversy surrounding Suparat Chaijangrid’s similar portraits last year. The exhibition runs until 25th October.
Categories: 6th October, politics, Prayut Chan-o-cha, Thailand
continued...