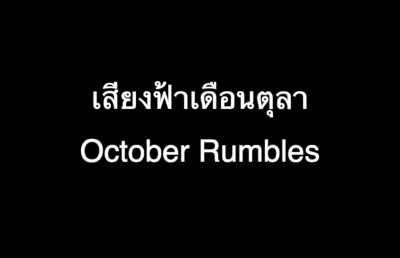 The film’s title has a double meaning. It’s now monsoon season in Thailand, and the rumbles of thunder on the soundtrack are a daily occurrence. But there have also been rumblings of a different kind this month: protests calling for a democratic government and reform of the monarchy. Riot police used water canon to disperse a peaceful protest in central Bangkok on 16th October, and more rallies have since been held around the capital. (The latest, at Silom Road yesterday, featured a red catwalk and a satirical fashion show.)

In his director’s statement (edited from an interview on the Polygon podcast), Apichatpong directly addresses the political situation: “I was initially more aware of my own suffering, in terms of my inability to express my freedom in my own country and the role of the military or the monarchy or whatever in creating these feelings. But then you realize there are others suffering much more in the Covid time and you see these really huge gaps in equality and the power of this struggle both in this time and the struggle that has been going on for decades.”