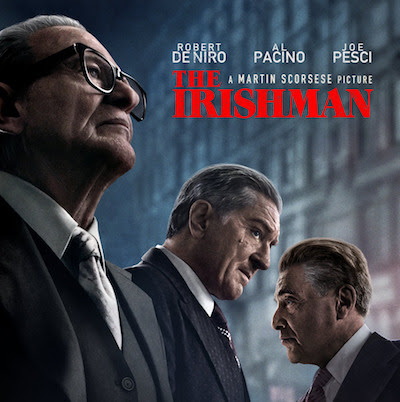 Martin Scorsese has directed twenty-five feature films, only a handful of which are gangster movies. But, perhaps due to the tremendous influence of GoodFellas and his long-overdue Oscar for The Departed, he’s indelibly associated with the gangster genre. Also (notwithstanding his recent work with Leonardo DiCaprio), Scorsese’s collaborations with Robert De Niro represent one of the greatest director-and-actor partnerships in cinema history. So when a new Scorsese film returned to the world of organised crime, and reunited the director with De Niro after two decades, expectations were set very high indeed.

The Irishman is a late-career masterpiece from Scorsese, made for Netflix after the major Hollywood studios baulked at its $150m budget. Scorsese has previously made documentaries (and a faux documentary, Rolling Thunder Revue) for Netflix, and directed the Boardwalk Empire pilot for HBO. The Netflix deal meant that The Irishman’s theatrical window was limited to just a few weeks, and there are no plans for a blu-ray or DVD release in the near future, though it’s streaming on Netflix (in its theatrical 1.85:1 aspect ratio) indefinitely.

The epic film spans almost fifty years, though its complex back-and-forth structure is never jarring or confusing, thanks to incredibly seamless editing by long-term Scorsese collaborator Thelma Schoonmaker. CGI was used to remove facial wrinkles in the flashback scenes, though the effect isn’t entirely convincing: while it does smooth the actors’ faces, it can’t compensate for their older bodies and slower movements. The film itself has a slower, more elegiac pace than Scorsese’s earlier gangster classics, and Joe Pesci’s performance is especially restrained (in contrast to his hot-tempered roles in Raging Bull, GoodFellas, and Casino).

The Irishman was adapted from I Heard You Paint Houses, based on the recollections of Frank Sheeran, a close associate of Jimmy Hoffa. (Sheeran, played by De Niro, is the eponymous Irishman. The film uses I Heard You Paint Houses as a subtitle, ‘painting houses’ being a metaphor for gangland killings.) Hoffa, played by Al Pacino, disappeared in 1975, and the circumstances of his death have never been revealed. Sheeran claimed responsibility, and The Irishman takes him at his word.
Categories: films
continued...