“The Prime Minister.
Show a bit of respect...” 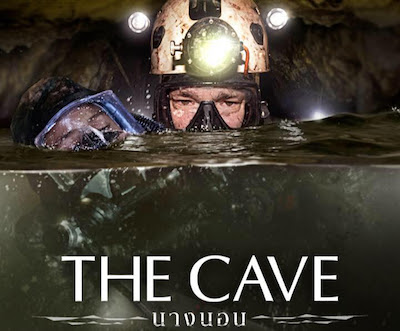 The Cave (นางนอน), based on the true story of last year’s miraculous cave rescue, opened in cinemas this week. The film sticks solidly to the facts, with several key participants playing themselves. It’s tense and dramatic, and begins in medias res: the very first line of dialogue is “Let’s go to the cave.” There’s a moment of Ace in the Hole-style social commentary—a vendor selling lottery tickets at the cave entrance—though one scene stands out as comic relief: the arrival of the Prime Minister.

Before the PM appears, he’s formally announced—“The Prime Minister. Show a bit of respect, guys.”—though while he was on-screen, there were chuckles from the cinema audience. The character has a close physical likeness to Prayut Chan-o-cha, and he serves no purpose other than to give gift baskets to the divers. He also uses broken English (like Prayut himself), telling one diver: “Oh! You marry her, visa no problem.”

The Cave is one of only a handful of films to feature Thai Prime Ministers, due to censorship of political content and public apathy towards politics. A biopic of Plaek Phibunsongkhram was abandoned in 1988 due to a lawsuit from his estate. Similarly, a Sarit Thanarat biopic—provisionally titled จอมพล (‘marshal’)—was vetoed by the censors in 2002. Sarit did feature briefly in the horror movie Zee Oui: The Man-Eater (ซี-อุย), ordering the swift execution of Zee Oui for political expediency.

Pen-ek Ratanaruang’s documentary Paradoxocracy (ประชาธิป’ไทย) discusses Thaksin Shinawatra, and the film’s distributor asked the director incredulously: “How can you put a film with Thaksin in the cinema?” Sulak Sivaraksa makes a similar point in the documentary itself, saying: “Your movie shouldn’t waste too much time on Thaksin.” (That line received applause at cinema screenings.)

In Ing Kanjanavanit’s banned Shakespeare Must Die (เชคสเปียร์ต้องตาย), Macbeth is reimagined as a Thaksin-like figure, and the similarity is noted self-referentially when a policeman says: “Your actor looks like our Dear Leader. Is this intentional?” Wisit Sasanatieng’s The Red Eagle (อินทรีแดง) features a Prime Minister who abandons his principles once he assumes office, reneging on a pre-election pledge to ban nuclear power. In a Bangkok Post interview, Wisit claimed that he “didn’t set out to criticise any particular prime minister... I only want to mock those who began as good guys fighting for the poor, then, like Darth Vader, they become villains once they have power.” But that sounds awfully like a description of Thaksin.

The disaster movie Death Wave (13-04-2022 วันโลกสังหาร) features Thailand’s most ludicrous cinematic Prime Minister, portrayed as a holier-than-thou figure who selflessly sacrifices his career for the greater good: “the lives and safety of my people are more valuable than my assumed position... I’m willing to lose everything in exchange for the lives of my people.” He even becomes an action hero, rescuing a busload of drowning children while a news reporter praises “our Prime Minister’s fearless courage.” Needless to say, that PM was entirely fictional.
Categories: film reviews, politics, Prayut Chan-o-cha, Thailand, Thaksin Shinawatra
continued...