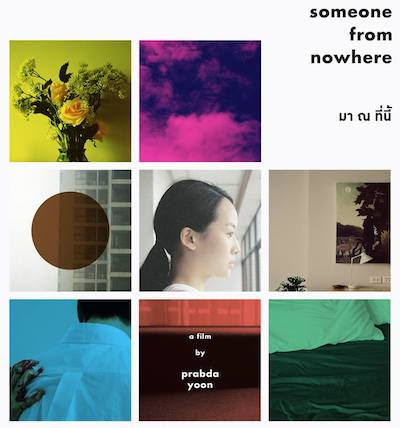 [Spoiler alert: this review reveals the film's ending.] Prabda Yoon's directorial debut, Motel Mist (โรงแรมต่างดาว) was a study of sexual politics and power dynamics, though it also had a political subtext, signalled by a shot of Bangkok's Democracy Monument in the wing mirror as a car drives away. In Prabda's more compelling second film Someone from Nowhere (มา ณ ที่นี้), the entire plot, location, and characters are all political metaphors.

The film takes place in a condo called Liberty Land, which becomes a microcosm for the country (as 'Thai' means 'liberated'). The condo's apparent owner, a young woman, goes about her morning routine: swimming, greeting various neighbours, and taking a shower. But then she discovers an injured man outside her front door, and phones the condominium staff and the police for help. Meanwhile, the man claims to be the condo's rightful owner, demanding: "The only thing I want is to have this place back." She insists that he's lying, and replies: "I won't let you people get away with this atrocity."

To all intents and purposes, the condo is hers, though her deeds of ownership are blank pages, and the assistance she called for never arrives. The analogy to the 2014 coup is clear: like Yingluck Shinawatra, the woman is intimidated by a powerful intruder (the man, representing the military reclaiming its traditional rights); she has no legal defence (her deeds were erased, just as the constitution was abrogated); and she receives no external support (Thailand's judicial system and police force didn't intervene to prevent the coup). The film's political subtext becomes increasingly direct, culminating with the national anthem playing as the man and woman stab each other.

Like Anocha Suwichakornpong's Mundane History (เจ้านกกระจอก), the film's repetitive structure highlights the cyclical nature of the military's interventions. The man places the woman's unconscious body outside, and assumes occupancy of the condo, going through the same morning routine as she did. He then discovers her outside the door, whereupon she claims to be the rightful owner and he insists that she's mistaken. By implication, the two protagonists have relived the same debate, with alternating roles, many times over (symbolising Thailand's transitions between military and civilian rule). Their apparent amnesia echoes the national tendency to gloss over repeated acts of political violence (as the title of Napat Treepalawisetkun's short film We Will Forget It Again also implies).

Someone from Nowhere's title ostensibly refers to the injured man, as the woman occupies the condo when the film begins and the audience's sympathies initially lie with her. But there are also suggestions that the woman is the interloper: the neighbours didn't acknowledge her during her morning routine, for example, while they readily converse with the man. One neighbour tells him that there's been no good news for eighty years, suggesting that the condo's residents harken back to the pre-democratic era before the 1932 revolution, and therefore that they accept him (the symbol of authoritarianism) rather than her (a disruption of the status quo).
Categories: films, politics
continued...