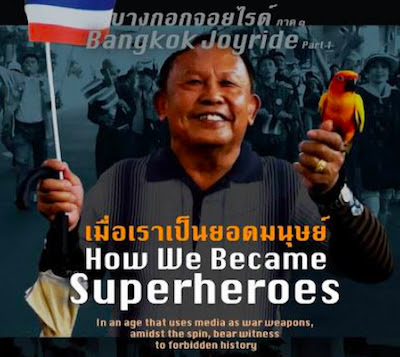 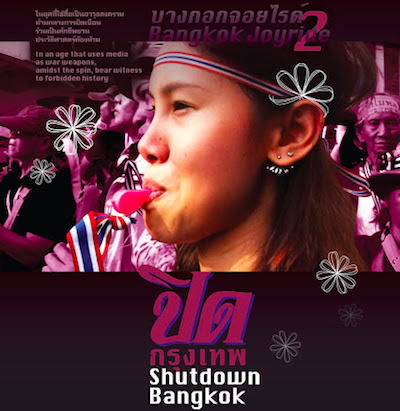 Cinema Oasis, the arthouse cinema that opened last month in Bangkok, will begin a season of political documentaries this month, after the Songkran holiday. The About Heroes season features Bangkok Joyride (บางกอกจอยไรด์), a documentary directed by Ing K. The film, divided into two chapters, is a record of the PDRC's protests in 2013 and 2014 against former prime ministers Yingluck and Thaksin Shinawatra.

Chapter one, How We Became Superheroes (เมื่อเราเป็นยอดมนุษย์), covers the first stage of the protest, when Suthep Thaugsuban campaigned against a proposed amnesty bill. The amnesty was a blatant attempt to exonerate Thaksin of his corruption charges, and was unanimously rejected by the Senate. The film also features extended clips of a parliamentary no-confidence debate against Yingluck. Emboldened after defeating the amnesty bill, Suthep called for the dissolution of parliament and the establishment of an appointed government.

Chapter two of the documentary, Shutdown Bangkok (ชัตดาวน์ประเทศไทย), covers the escalation of the PDRC's protests. Following the playbook of the PAD, the PDRC shut down major roads in central Bangkok and occupied government buildings, yet were unopposed by the police. The anti-democratic nature of the protest was revealed when the PDRC sabotaged the 2014 general election, which may be included in the forthcoming third episode, Singing at Funerals (เพลงแห่ศพ).

Ing has also directed the banned films Shakespeare Must Die (เชคสเปียร์ต้องตาย) and My Teacher Eats Biscuits (คนกราบหมา). Her documentary Censor Must Die (เซ็นเซอร์ต้องตาย) was not banned as, according to section 27(1) of the Film and Video Act, "films of news events" are exempt from classification.

When I interviewed Ing in 2016, she said: "this ruling has set a marvellous legal precedent for all documentary films. I'm going to use this ruling to exempt my next film (another cinéma vérité documentary, called Bangkok Joyride) from the censorship process. Then it's a matter of finding a cinema." She solved that problem by building Cinema Oasis.

Citing the "news events" exemption, she didn't submit Bangkok Joyride to the censors, which explains why she was able to include a protester saying "Long live the King" in chapter one and a snippet of the royal anthem in chapter two. Boundary (ฟ้าตํ่าแผ่นดินสูง) was muted to remove a chant of "Long live the King", which was regarded as politicisation of the monarchy, and the royal anthem was cut from Soi Cowboy (ซอยคาวบอย) for commercialisation of the monarchy.
Categories: film screenings, politics, Shutdown Bangkok, Thailand, Thaksin Shinawatra, Yingluck Shinawatra
continued...