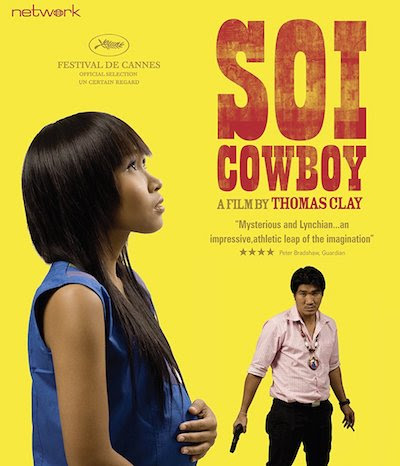 Thomas Clay's film Soi Cowboy (ซอยคาวบอย) was released on DVD in the UK by Network in 2010. While the film was cut for its Thai release, the DVD version is uncensored. Thai censors cut a scene featuring the royal anthem, filmed inside a cinema in Bangkok. (All film screenings in Thailand are preceded by the royal anthem, and the audience is required to stand while it's being played.)

The (fairly innocuous) scene in question lasts for less than a minute, and shows audience members rising from their seats when the anthem begins. The film's producer, Tom Waller, told me earlier this year: "The censors felt that use of the royal anthem in the film was deemed commercial use of the monarchy and that was not allowed, so they ordered that scene be cut from the film."

It was for this reason that Apichatpong Weerasethakul showed a cinema audience standing in silence in his film Cemetery of Splendour (รักที่ ขอนแก่น), as he told me in an interview last year: "I actually wanted to show the royal anthem, because it's documentary-like. It's what we do. But I know it's impossible, because in the movie Soi Cowboy, this was cut out. Censored. So I said, 'It's impossible anyway.' So, just silence."
Categories: censorship, films
continued...