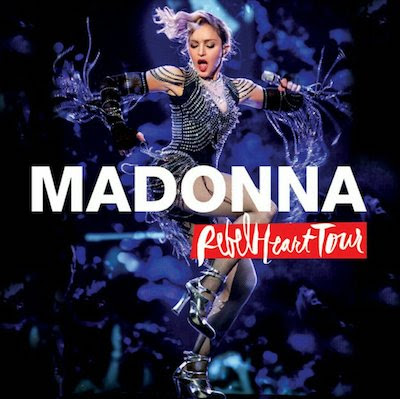 Madonna's Rebel Heart Tour will be released on video and CD next month. The concert, promoting her Rebel Heart album, was broadcast on Showtime last December.

The DVD and blu-ray versions feature the following songs: Iconic, Bitch I'm Madonna, Burning Up, a medley of Holy Water and Vogue, Devil Pray, Messiah, Body Shop, True Blue, Deeper & Deeper, HeartBreakCity, Like A Virgin, S.E.X., Living For Love, La Isla Bonita, a medley of Dress You Up and Into The Groove, Rebel Heart, Illuminati, Music, Candy Shop, Material Girl, La Vie En Rose, Unapologetic Bitch, Holiday, and Like A Prayer. (Take A Bow is included as a bonus in Japan.)

The DVD and blu-ray releases will also include extracts from the Tears Of A Clown cabaret show, though unfortunately it's the rather shambolic Melbourne debut rather than the more polished Miami performance. The black-and-white extracts include performances of Borderline, Don't Tell Me (with an a cappella section), and a few lines of Holiday.
Categories: music
continued...