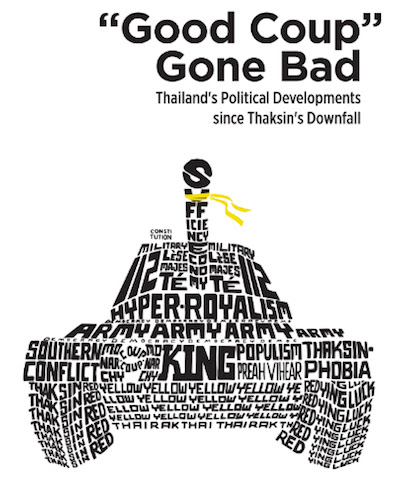 "Good Coup" Gone Bad: Thailand's Political Developments Since Thaksin's Downfall is an anthology of essays analysing the aftermath of the 2006 coup. Editor Pavin Chachavalpongpun also co-edited a similar anthology, Bangkok, May 2010, which was notable for its (partially successful) attempt to present arguments from both sides of Thailand's political divide.

"Good Coup" Gone Bad makes no such attempt at balance, as the cover illustration makes clear. There are essays on post-coup lèse-majesté, the decline of the PAD, and the rise of the UDD. In his opening chapter (from which the book takes its title), Pavin argues: "The 2006 coup that was staged amid joy among many Bangkok residents - some even calling it a "good coup" - has turned out to be disastrous".
Categories: books, politics
continued...