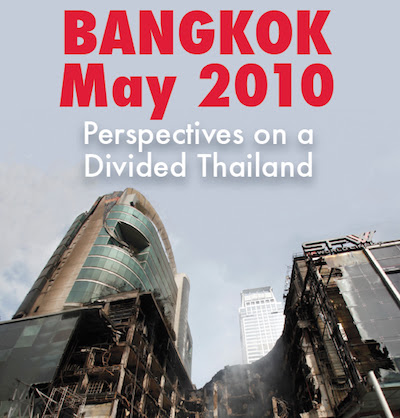 Bangkok, May 2010: Perspectives On A Divided Thailand is a collection of essays analysing the causes and consequences of the 19th May 2010 military massacre, when dozens of red-shirt protesters were shot by the Thai army. The book was edited by Michael J Montesano, Pavin Chachavalpongpun, and Aekpol Chongvilaivan; Pavin later edited a similar collection, 'Good Coup' Gone Bad, on the aftermath of the 2006 coup.

Bangkok, May 2010 is significant for the reputations of its contributors: it includes chapters by Chris Baker, Pasuk Phongpaichit, David Streckfuss, Duncan McCargo, and other leading scholars on contemporary Thai politics. Streckfuss discusses the UDD's accusations of double standards, observing that "By striking against double standards and impunity, Thai society has the rare opportunity to make justice and accountability a rallying cry." McCargo compares the PAD and UDD rallies to the Black May protests of 1992, noting that they fit a pattern of "manufactured crisis" and conform to the "Vicious Cycle" previously identified by Chai-anan Samudavanija.

The book is also notable for its attempt to present a diversity of perspectives, though as Montesano admits in his introduction, complete ideological balance was not possible: "Some, maybe most, of the contributions to this volume have interpretive or political agendas. Rather fewer, perhaps, are clearly "yellow" in their point of view than are unabashedly "red"." Firmly on the yellow end of the spectrum, Kasit Piromya accuses the UDD of armed insurrection and compares them with the Communists of the 1970s: "the battle had moved from the jungles to the streets of Bangkok."

James Stent's long opening chapter has a more nuanced analysis: "At one pole are those who say that the protesters are paid to attend rallies, and are heavily infiltrated by well armed "terrorists" under the direction and control of extremists taking their orders from Thaksin... On the other side of the debate are those who would paint the protesters as entirely peaceful, which is obviously not true. The truth probably lies somewhere between these two poles." Stent's assessment of Thaksin Shinawatra is also more balanced than most: "I see him in shades of grey - neither the messiah that his rural followers take him for even today, nor the devil incarnate that the Bangkok elite see him as being."

There is much discussion of the extent to which the red-shirt uprising was determined by social class (the rural 'prai' versus the establishment 'ammart'). Chairat Charoensin-o-larn presents the conventional interpretation that it represents a class struggle: "The unrest of May 2010 was a manifestation of the simmering new politics of desire of unprivileged Thais, and Thailand's ruling elites ought to pay close attention." However, Shawn W Crispin argues against this view: "These interpretations must transcend the simplistic and misleading discourse of class struggle that has been advanced by Thaksin's operatives for propaganda purposes and uncritically perpetuated by many foreign academics."
Categories: books, politics
continued...