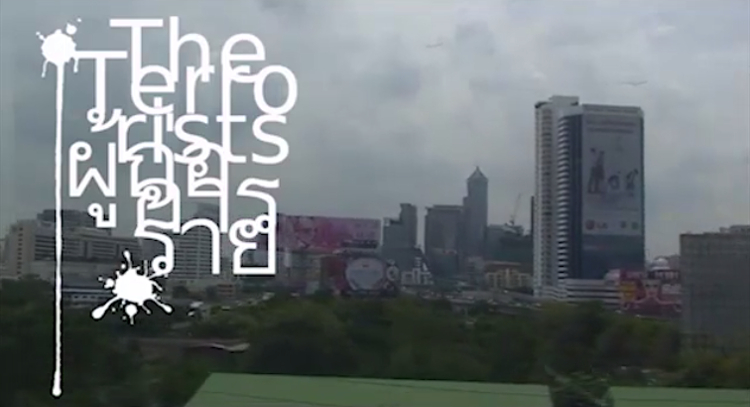 Thunska Pansittivorakul’s The Terrorists (ผู้ก่อการร้าย) is his most political film to date, a direct and personal response to last year’s massacre in Bangkok. With his previous political work, This Area Is Under Quarantine (บริเวณนี้อยู่ภายใต้การกักกัน), Thunska waited four years before criticising Thaksin Shinawatra for the Tak Bai incident, though The Terrorists is an immediate, courageous, and necessary condemnation of the government. (This month, Abhisit Vejjajiva conceded defeat to Thaksin’s sister, Yingluck, though The Terrorists was made long before the election.)

The Terrorists begins with scenes of Thai fishermen; later, it features footage shot at an aquarium. The symbolic value of these sequences is revealed when a Thai monk is quoted equating killing Communists with catching fish. This strategy was also employed in Rwanda, where Tutsis were compared to cockroaches; it represents a dehumanisation of political opponents, in order to justify the massacre of civilians. The film’s title itself refers to a similar propaganda tactic, Abhisit and Suthep’s demonisation of red-shirt protesters as terrorists in order to turn public opinion against them.

Documentary footage of the protests, providing yet more evidence that the Thai army shot and killed unarmed pro-democracy protesters, is also included. Despite the existence of such evidence, no one in the army has yet been held accountable for the massacre; the film ends with a pertinent rhetorical question: “who do you think has the power to order the soldiers?” Footage of the 1976 Thammasat University massacre is also included, demonstrating that history will keep repeating itself if we don’t prevent it.

The Terrorists was screened at the Dialogic exhibition yesterday, alongside Thunska’s short film KI SS. He has also directed the semi-autobiographical documentary Reincarnate (จุติ), and his early short films were screened at a retrospective in 2008 (Inside Out, Outside In).
Categories: censorship, films, politics