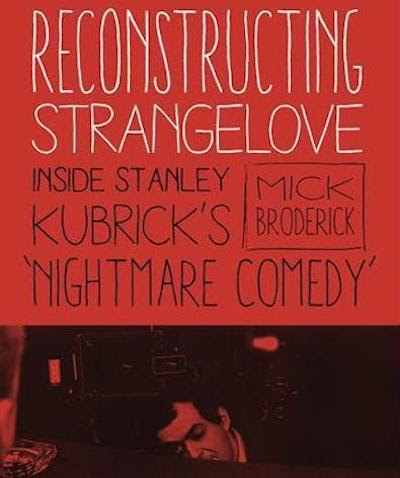 Reconstructing Strangelove: Inside Stanley Kubrick's 'Nightmare Comedy' analyses the political and cultural background to Dr Strangelove, and assesses the accuracy behind the satire. Author Mick Broderick is one of a select few researchers (including Bernd Eichhorn and Jon Ronson) who had access to Stanley Kubrick's papers in situ at Childwickbury before they were transferred to the Kubrick Archive.

The book is not "the definitive work on Kubrick's Cold War comic masterpiece," as the back cover claims, though it is an authoritative account of Kubrick's collaborations with his screenwriters. It also debunks some of the legends surrounding the making of the film: "Over the years a number of myths concerning the production of the film have circulated, stories that only a forensic analysis of Kubrick's production files can comprehensively evaluate."

Broderick quotes from Kubrick's initial letter to Peter George (the author of the source novel), in which the director asks: "Why, if the Russians had built a Doomsday Machine, would they have kept it a secret?" This query found its way into the final script, when Strangelove says, "the whole point of the Doomsday Machine is lost, if you keep it a secret!" Numerous pre-production documents, including this handwritten letter, are quoted and reproduced, and there are extensive footnotes.

In the book's most fascinating chapter, Broderick uses daily continuity reports "to reconstitute filmed sequences that failed to make the final cut." This chapter previously appeared in Stanley Kubrick: New Perspectives, though Broderick has added extra material relating to the film's missing pie-fight sequence. (Broderick criticises the Kubrick estate's refusal to acknowledge the debate surrounding the pie scene as "futile and ultimately counter-productive.")

Peter Kramer wrote a monograph on Dr Strangelove for the BFI Film Classics series, and Piers Bizony is currently writing a new book on the film. The Kubrick exhibition catalogue and The Stanley Kubrick Archives (edited by Alison Castle) also include chapters on the making of the film.
Tags: books
continued...