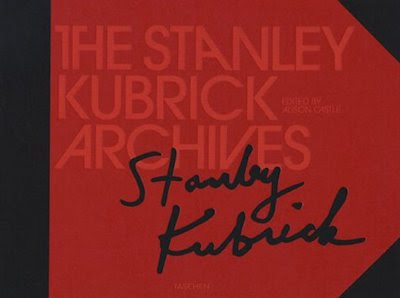 An exhibition of artefacts from Stanley Kubrick's personal archives was held in Germany last year, and will begin an international tour later this year. The exhibition was curated by Bernd Eichhorn, who was one of a select few researchers permitted to examine Kubrick's archives in situ at Childwickbury Manor (his home in St Albans, near London) after his death. Alison Castle also delved into Kubrick's storage boxes at Childwickbury, and her new book The Stanley Kubrick Archives is arguably the definitive work on Kubrick.

If a book's weight is any indication of its quality (and it often is), then The Stanley Kubrick Archives is very good indeed, weighing 5kg. This lavish, folio-sized book begins with frame-enlargements from each of Kubrick's films from Killer's Kiss (under its working title Kiss Me, Kill Me) to Eyes Wide Shut. Unfortunately, this section is problematic for a couple of reasons: it omits Fear and Desire (the feature debut that Kubrick later disowned), and it lists incorrect aspect ratios for three films. (Paths of Glory's correct ratio is 1.66:1, Lolita's alternates between 1.33:1 and 1.66:1, and Barry Lyndon's is 1.66:1).

The second half of the book presents "the nuts and bolts of Kubrick's creative history." This is a treasure trove for Kubrick fans, illustrated with more than 800 photographs, script pages, and props. There are also reprints of selected Kubrick interviews, and new essays by Gene D. Phillips, Rodney Hill, and Michel Ciment. Each copy of this (admittedly expensive) book also comes with a CD recording of an interview Kubrick gave to Jeremy Bernstein on 27th November 1966, and a strip of twelve frames from Kubrick's personal 70mm print of 2001: A Space Odyssey.
Categories: book reviews, Stanley Kubrick
continued...