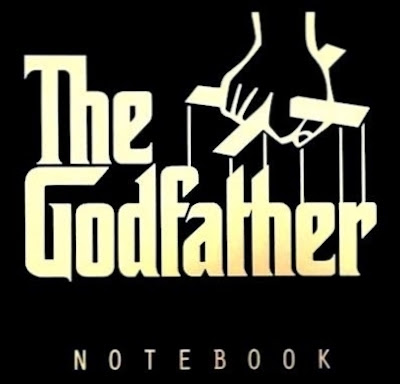 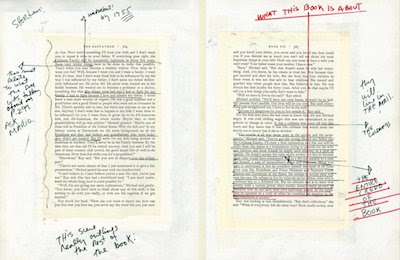 Before writing and directing The Godfather, Francis Ford Coppola compiled what he called The Godfather Notebook, a binder containing pages from Mario Puzo's novel and Coppola's treatment, with wide margins for further annotations. It was a scrapbook of Coppola's typed and hand-written thoughts on the film's key themes and characters, divided into fifty scenes.

Peter Cowie reproduces a page from this "massive tome, biblical in proportions" in The Godfather Book (1997). Another page is reproduced in Cowie's The Godfather: The Official Motion Picture Archives (2012). The booklet for The Godfather: The Complete Trilogy 1901-1980 VHS edition (1992) also reproduces one of the pages. The Annotated Godfather (2007) reproduces two pages from it, and Jenny M Jones notes that Coppola "relied on the notebook rather than the shooting script for inspiration."

A complete facsimile of The Godfather Notebook has now been published, with a new introduction by Coppola ("The notebook was a kind of multilayered road map for me to direct the film") and photographs by Steve Schapiro (from The Godfather Family Album). There are almost 800 pages of Coppola's notes and marginalia, such as his comment in underlined capitals that Michael Corleone's opinion of his father ("He doesn't accept the rules of the society we live in") is "THE ENTIRE CREDO OF THE BOOK".
Tags: books
continued...