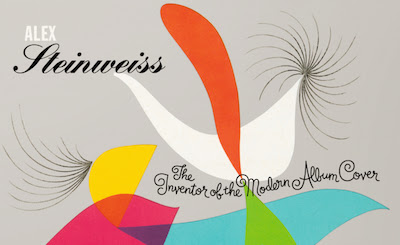 Alex Steinweiss, written by Kevin Reagan and published by Taschen, is a comprehensive monograph devoted to the man who was, as the subtitle puts it, The Inventor Of The Modern Album Cover. The book (whose cover and endpapers resemble a 78rpm record sleeve) was written with Steinweiss' full collaboration, and it was published just a few months before he died.

Steinweiss was working for Columbia Records when he designed an illustrated cover for their 1940 Richard Rogers album Smash Song Hits. In The Art Of The Album Cover, Richard Evans calls Steinweiss "the inventor of the individual album cover," and Nick de Ville's more comprehensive book on the same subject, Album, notes that the 1940 Steinweiss sleeve "resulted in the launch of illustrated covers for albums".

Taschen's book is the definitive study of Steinweiss and his work, with many full-page reproductions of his record covers and other examples of graphic design. (His 1942 Beethoven's Emperor concerto cover "may well have inspired" Pink Floyd's The Dark Side Of The Moon.) It also includes a lengthy essay by Steven Heller, Visualizing Music. (An earlier book on Steinweiss, For The Record by Jennifer McKnight-Trontz, also has an introduction by Heller.)
Categories: books, music
continued...