To A Turkish President 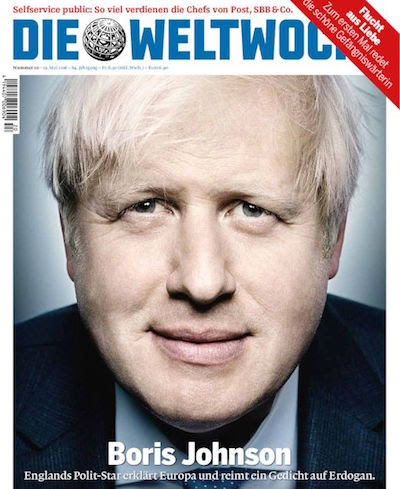 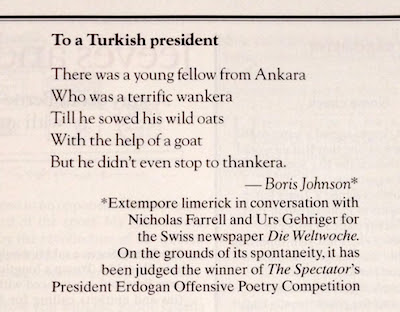 Boris Johnson has been announced as the winner of the "President Erdogan Insulting Poetry Competition" after he composed a limerick about Turkish President Recep Tayyip Erdoğan. Johnson was interviewed for today's issue of Die Weltwoche, a weekly Swiss magazine, and asked to improvise a verse satirising Erdoğan. His response was:

"There was a young fellow from Ankara
Who was a colossal wankera
Till he sowed his wild oats
With the help of a goat
But he didn’t even stop to thankera".

Douglas Murray, who organised the poetry competition, declared that Johnson had won, though the result is questionable for several reasons. Murray had previously requested that poems would not be considered if they included made-up words, specifically "wankera". Also, Johnson is a former editor of The Spectator, the magazine that ran the competition. And the deadline for entries was 23rd June, so today's announcement is rather premature.

Die Weltwoche printed the limerick with the words "colossal wankera", though when it was published in The Spectator (in the current issue, dated 21st May), it was changed to "terrific wankera" and titled To A Turkish President. The competition, and the winning limerick, mocked Erdoğan in solidarity with Jan Boehmermann, who is under investigation after reciting a poem insulting the President on German television last month.
Categories: censorship, media, politics
continued...