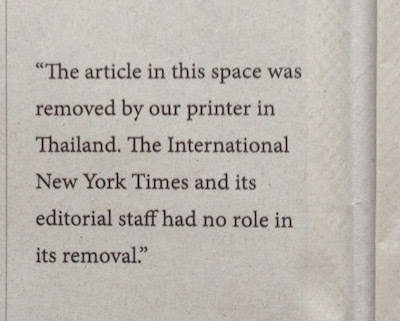 The International New York Times has been censored by its Thai printer for the fourth time this year. An article on page four of today's newspaper was replaced by a blank space and a brief explanation: "The article in this space was removed by our printer in Thailand. The International New York Times and its editorial staff had no role in its removal."

The article, headlined "Thai man may go to prison for insulting king's dog", is a report by Thomas Fuller about Thanakorn Siripaiboon, who was arrested last week and charged with lèse-majesté. As the headline suggests, the charges against Thanakorn reflect a wider interpretation of the lèse-majesté law, though this aspect of the case has not been mentioned by mainstream Thai media.