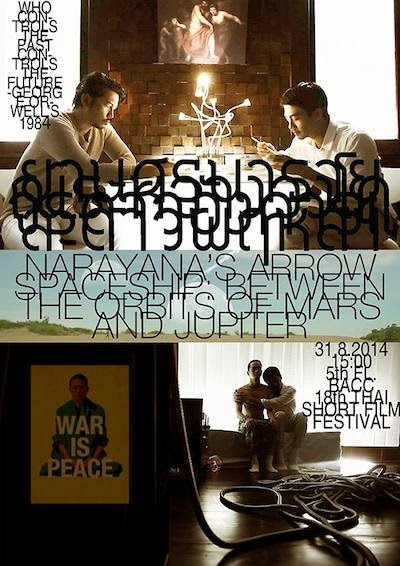 The 18th Thai Short Film & Video Festival opens on 28th August at BACC in Bangkok. The Festival will run until 7th September, and all screenings are free. The 11th Festival was held at Bangkok's now-closed EGV Grand Discovery cinema, though the 12th, 13th, and all subsequent festivals have been held at BACC.

The film ยานศรนารายณ์: ระหว่างวงโคจรดาวอังคารและดาวพฤหัสฯ, which was previously shown as part of the pre-Festival Marathon, will be screened on 31st August. A prophetic film, it was inspired by George Orwell's 1984 and produced before that novel became a symbol of the anti-coup movement. It's an extract from a feature-length film, though some of the dialogue has been self-censored to avoid accusations of lèse-majesté. The credits have also been blacked out, and the film was submitted to the Festival anonymously. (I'm sworn to secrecy.) Another extract from the same film was screened as a stand-alone short in 2012.
Categories: films
continued...