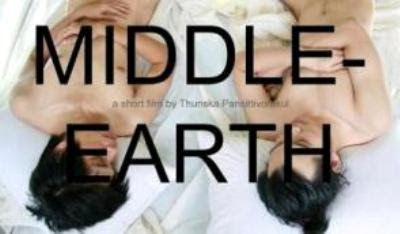 I went to Spoken Silence yesterday, a themed evening of films about the repressive social and cultural environment following last year's coup. There were twelve films in the programme:

Silence In D Minor
(filmed through a green tarpaulin which acted as a filter, ending with a CNS announcement inviting youth participation; directed by Chalida Uabumrungjit)

The Duck Empire Strike Back [sic]
(Thaksin's ousting through the metaphor of a rubber duckie; directed by Nutthorn Kangwanklai)

Letter From The Silence
(shots of a letter about a taxi driver who crashed his cab into a tank; directed by Prap Boonpan)

3-0
(intercutting between a woman trying to cross the road, another woman exercising, and a boy's physiotherapy; ending with a peaceful anti-coup demonstration; directed by Anocha Suwichakornpong)

When The Movie Listens
(a man sitting and looking into the camera, as if waiting for someone to speak; directed by Tulapop Saenjaroen)

Man With A Video Camera
(a montage of scenes from daily life, including a pro-Thaksin rally, inspired by Dziga Vertov's Man With A Movie Camera; directed by Jakrawal Nilthamrong)

Middle-Earth
(a male couple sleeping next to each other, naked; directed by Thunska Pansittivorakul)

The Spoken Silence films were, for the most part, metaphorical rather than overtly political, though several of them included found footage of coup-related events. They were often literally silent (only Fake World featured actual dialogue), even encouraging the audience to provide the soundtrack (The Love Culprit invited us to sing along to the karaoke; When The Movie Listens was an experiment in audience participation, asking us to speak as the actor listened).

Unfortunately, as evidenced by my synopses above - and notwithstanding the Silence theme - not understanding Thai meant that there was a lot I missed out on. My central motivation for attending, however, Thunska's Middle-Earth, was as outstanding as I'd expected: a beautiful, tender, and ultimately playful film. The directors of each film took part in a Q&A session after the screenings.
Categories: Apichatpong Weerasethakul, film screenings, Thailand, Thunska Pansittivorakul
continued...