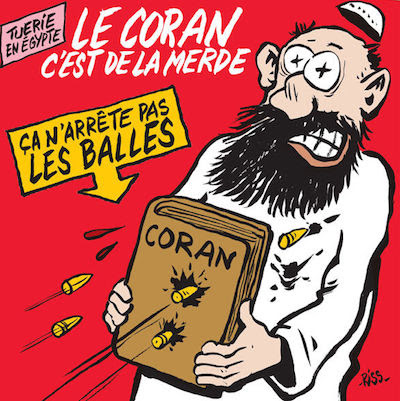 The satirical French newspaper Charlie Hebdo is being sued for blasphemy by the Muslim Judicial Defence League, and the case will be heard in a Strasbourg court on 7th April. The law of blasphemy was abolished throughout most of France after the French Revolution, though it still applies in the Alsace-Moselle region, which includes Strasbourg.

The issue of Charlie Hebdo under investigation was published on 10th July last year. Its front page featured a cartoon by Laurent Sourisseau (known as Riss), accompanied by the headline "LE CORAN C'EST DE LA MERDE" ('the Koran is shit').