The Museum Of Scandals 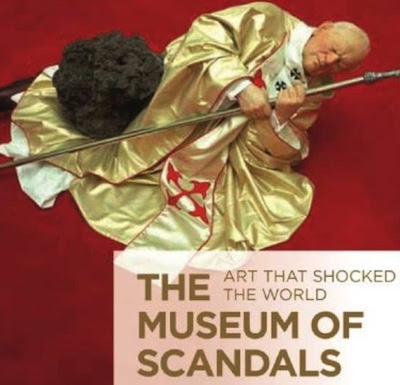 The Museum Of Scandals: Art That Shocked The World, by Elea Baucheron and Diane Routex, is a survey of shocking and provocative art from the Renaissance until today. The book is a translation of the French Le Musee Des Scandales: L'Art Qui Fache. Like The Art Museum, it's designed as a museum in a book, with full-page reproductions of individual artworks arranged in themed galleries.

The book's scope - both historical and thematic - is wide-ranging, though it's a slim volume with less than 200 pages. There are chapters devoted to blasphemy (including Forbidden Art 2006 and Andres Serrano's crucifix-in-urine Piss Christ), political incorrectness (including Honore Daumier's Gargantua, discussed in The Art Of Controversy), and sex (including the abject Viennese Actionist performances and - in a rare uncensored reproduction - Nan Goldin's Klara & Edda Belly-Dancing).

The final chapter, discussing transgressive art, is the most fascinating. It recounts the scandals caused by modern art movements such as Impressionism, Cubism, Dada, and Abstract Expressionism (The Shock Of The New, as Robert Hughes described it), though it also covers potentially obscene artworks such as Piero Manzoni's Merda d'Artista ("what it says on the tin", as the Ronseal slogan claimed), Bodyworlds, Marco Evaristti's Helena (goldfish in blenders), and - most controversially - Xiao Yu's Ruan (the head of a human foetus attached to the body of seagull).

There are a few notable omissions. The Mohammed cartoons are not included, and neither are the pornographic Made In Heaven photographs of Jeff Koons and Ilona Staller. Rick Gibson's truly shocking Human Ear-Rings (foetuses worn as jewellery) are also missing. Robert Mapplethorpe is included, though he's represented by one of his less extreme photos. There is an index, though no bibliography or footnotes.