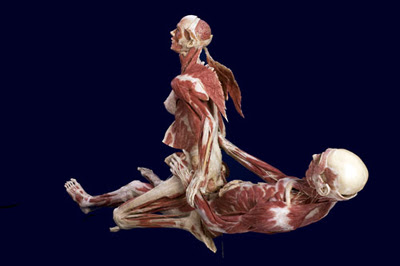 Bodyworlds, the anatomical exhibition of preserved human corpses organised by Gunther von Hagens, has been touring the world for the past twelve years. Famously, when the exhibition came to London in 2002, von Hagens performed a public autopsy which was later televised.

This year, two corpses posed in mid-coitus were added to the exhibition, though they had to be removed before the exhibition was shown in Cologne (Germany), Augsburg (Germany), and Zurich (Switzerland). (A Bodyworlds imitator, Our Body, was banned in France earlier this year.)
Tags: art, censorship
continued...