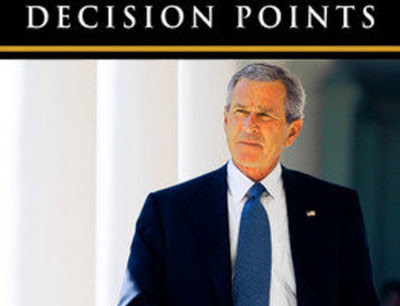 George W Bush has been making various media appearances this week, to promote his memoir Decision Points. James Harding's occasionally sarcastic article in The Times was the most hard-hitting (or the least softball) interview, though the low-point came in Oprah Winfrey's show when she reassuringly held Bush's hand. (Bush previously gave extensive interviews to Robert Draper for Dead Certain in 2007.)

Decision Points is credited solely to Bush, though in the acknowledgements he explains ambiguously that he "worked with" Chris Michel. It's unlikely that someone famous for Bushisms like "Families is where our nation finds hope, where wings take dream" [sic!] could write a coherent manuscript, therefore we can assume that, unlike Tony Blair's memoir A Journey, Decision Points was ghost-written. Nevertheless, it does have some characteristic Bush lines: after 9/11 he wanted to "find out who did this, and kick their ass".

Unsurprisingly, Bush does not admit to many regrets, and the few that he does acknowledge are presentational rather than ideological. The premature "MISSION ACCOMPLISHED" banner was "a big mistake", but he still justifies waterboarding, Guantanamo Bay, and the invasion of Iraq. He attempts to refute his image as a warmonger, detailing his efforts to secure the required UN resolutions, though he later appears impatient with diplomacy: "It felt like it was taking forever". Reading this book produced a very similar feeling.
Categories: book reviews, George W. Bush, politics
continued...