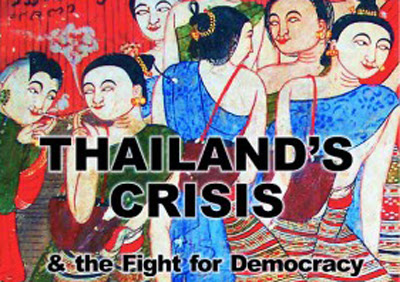 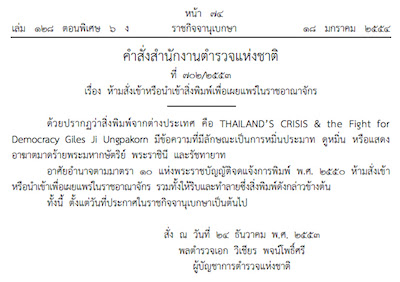 Giles Ji Ungpakorn's new book Thailand's Crisis & The Fight For Democracy discusses Thai politics following the 2006 coup. Ji critiques the the 2007 military constitution and criticises the current climate of political censorship. His Red Siam manifesto, in which he calls for the adoption of the French tripartite motto 'liberty, equality, fraternity', is also included. It has been banned from distribution in Thailand.

Ji states plainly what others don't dare to say. He can do this because he is living in exile in the UK, after his previous book, A Coup For The Rich, was accused of lèse-majesté. (The most controversial passages from A Coup For The Rich are included in Thailand's Crisis as an appendix.) However, there is no attempt at objectivity; for example, he claims that the editing of the controversial Abhisit audio clip "did not in any way distort what Abhisit actually said", whereas even the Prime Minister's critics admit that the tape was misleading.

There is surprisingly little commentary on the PAD's 2008 seizures of Government House and Suvarnabhumi airport or the 2009 Songkran riots. (The events of May 2010 occurred too late for inclusion.) Also, the drawbacks of self-publishing are apparent: Ji's spelling ("ice burg"), punctuation ("!!"), and italicisation are unconventional and distracting. Unfortunately, much of the material is not new: parts of chapters two and three, most of chapters one and five, and almost all of chapter four have been copied from A Coup For The Rich.
Categories: books, censorship, politics
continued...