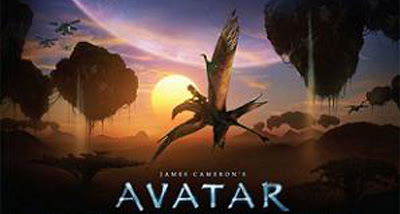 Avatar is James Cameron's first feature film in twelve years. After the success of Titanic (eleven Oscars, equal to Ben-Hur; record-breaking box-office exceeding $1,000,000,000), he concentrated on television documentaries, as presenter of 2001: The Making Of A Myth and executive producer of The Lost Tomb Of Jesus.

Like Stanley Kubrick's delayed (and ultimately posthumous) AI, Cameron postponed the development of Avatar until CGI was sufficiently advanced. Apparently, it was the motion capture technology used to create Gollum in The Lord Of The Rings (I, II, and III) that convinced him to begin production. Cameron himself has also been a CGI pioneer: the morphing effects of the T-1000 were the highlights of Terminator II, the action sequel to his intelligent noir/SF The Terminator.

Avatar has a whole new world to introduce: Pandoran flora and fauna (bioluminescent and fascinating), Na'vi mythology, and even a new language. The result bears comparison with the ecosystem and mythology in Star Wars IV-VI, and Avatar may revolutionise SF in a similar way, though it also results in similarly flat, expository dialogue. (There is an obligatory "You are not in Kansas" Wizard Of Oz reference.) Avatar's plot revolves around a mineral called unobtainium, though this (as its name suggests) is merely a MacGuffin, providing the initial motivation for the characters to assume their avatar forms (a process similar to The Matrix, and also a metaphor for Avatar's motion-capture technology).

The invasion of Pandora has clear parallels with America's wars against Vietnam and Iraq, a point hammered home by the script ("hearts and minds"; "shock and awe"). The extensive battle footage is surely aimed at teenage boys (Hollywood's current favourite demographic), though this is offset by the film's Titanic-style romance and its conservationist, pacifist message (a painful reminder of "I know now why you cry" from Terminator II).

I'm not usually a fan of CGI, as it's too often used as an easy alternative to traditional effects (as in, for example, the most recent King Kong remake), though in Avatar the CGI enables Cameron to create a stunningly photo-realistic ecosystem populated by believable motion-capture characters. Before its release, Avatar was breathlessly described as 'the future of cinema' by reviewers who had not seen it; while not representing a paradigm shift in filmmaking itself, the film's epic spectacle and subtly immersive 3D will hopefully lure YouTube/iPod viewers back into cinemas. (Avatar was conceived and filmed as a 3D production, though a 2D version is also screening at some cinemas.)
Tags: films
continued...