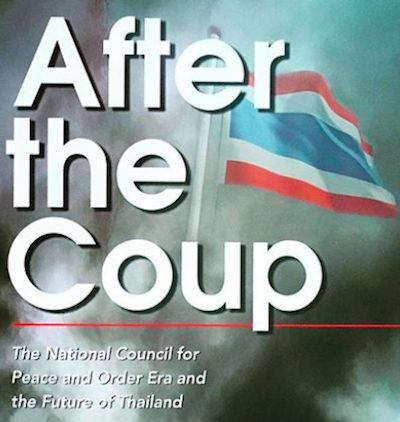 After the Coup: The National Council for Peace and Order Era and the Future of Thailand, edited by Michael J. Montesano, Terence Chong, and Mark Heng, is a collection of essays on Thailand's political situation since the 2014 coup. Contributors include influential commentators such as Duncan McCargo, Thongchai Winichakul, and Puangthong Pawakapan. (Montesano previously co-edited Bangkok, May 2010 and contributed to Divided over Thaksin.)

The political affiliations of Thais from the middle class, the south, the north, and the northeast are examined in four chapters. Middle-class and southern interviewees discuss their reasons for joining the PAD and PDRC, notably their devotion to Rama IX and their anger at Thaksin Shinawatra's "alleged disloyalty to King Bhumibol. Most interviewees cited this issue as a decisive factor in turning them against Thaksin." The book also confirms a widespread and patronising sense of middle-class superiority: "All interviewees stressed a lack of education among Thaksin's supporters as evidence that elections in Thailand lack legitimacy; the uneducated simply succumb to vote buying."

In contrast, two chapters on the north and northeast focus on the red-shirt movement and the UDD, asking two pertinent questions: "Why was there so little resistance to the coup? Why were there so few Red Shirt protests in the twelve months following the coup?" The junta's intimidation tactics provide the answer: red-shirts are closely monitored and coerced into renouncing all political activity, including one interviewee who "had to promise not to wear a red shirt, or even a checked shirt containing red in the pattern."

Other chapters have a broader focus. Prajak Kongkirati expands his earlier essay on the 2014 election (in Military, Monarchy and Repression) to analyse forty years of election-related violence. Surachart Bamrungsuk provides a potted history of Thai coups, demonstrating that, for the military, practice makes perfect: "The absence of external security challenges has left the army free to involve itself in political affairs and to become more skilled in political manipulation." Thongchai Winichakul (updating his essay in "Good Coup" Gone Bad) examines the prospects for royalist hegemony following the succession.

There are two especially interesting chapters on mass media and politics. Aim Sinpeng and Wimonsiri Hemtanon highlight the 'filter bubble' effect caused by Thailand's partisan media, though their essay includes an unfortunate instance of self-censorship. They discuss a 1995 Thai Rath (ไทยรัฐ) corruption exposé "involving a high-profile member of the prime minister's Democrat Party" without naming the politician involved. (Duncan McCargo previously identified Suthep Thaugsuban as "the figure at the centre of the scandal" in his book Politics and the Press in Thailand.)

Puangthong Pawakapan surveys international media coverage of the monarchy since the 1960s, noting how critical reporting has increased since the 2006 coup: "The foreign press was instrumental in constructing a benign image of King Bhumibol in the international arena, and was thus complicit in entrenching the power of the monarchy. However, the political coverage of Thailand changed after 2006. The foreign press began to see the monarchy... as a crucial factor in the conflict that now engulfed Thailand."
Categories: book reviews, politics, red-shirts, Shutdown Bangkok, Thailand, Thaksin Shinawatra, yellow-shirts
continued...